You are here: Home / Google / Google Clarifies Use of Disavow Files With Penguin Devaluing Links 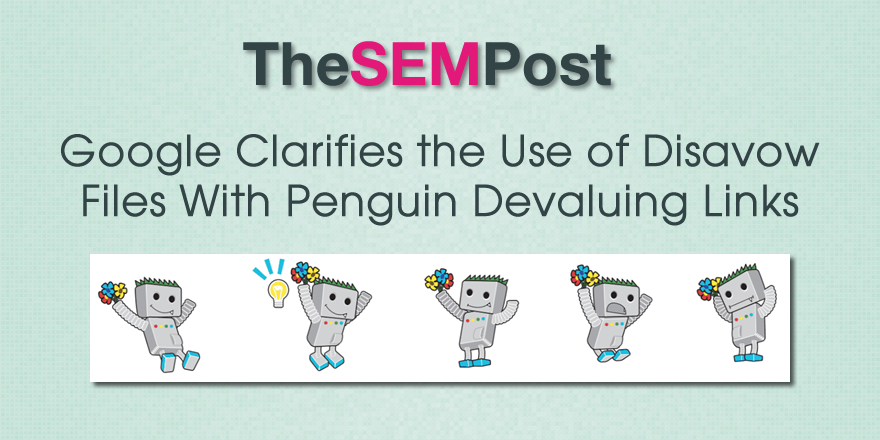 There has been plenty of debate over the past couple of weeks over the disavow tool and whether site owners should be using it still, now that Penguin devalues spammy links.

John Mueller tackled this question in the latest Webmaster Office Hours.  And the verdict is if you (or someone hired/connected to the site) has built spammy links to the site, then you should be using the disavow tool.  But for the majority of sites, it isn’t needed.

The largest majority of the websites don’t need to do anything with the disavow because like you said, we are able to pick up the normal issue anyway and we can take care of that.

If you do know that your SEO has done some shady things with links, or previous SEO or someone else, then of course doing the disavow is a good way to kind of make sure you can sleep at night and don’t have to worry that Google is maybe interpreting those links in a way that you didn’t want to happen.

The normal small business website out there, they don’t need to do anything with the disavow file.  That’s also why the tool isn’t tied in with the rest of Search Console, its kind of a separate tool on its own, it’s really something that you only really need to do if you are aware of issues around links to your site.

He also makes clear that Penguin is a web spam algorithm, meaning it targets spam specifically, when another Penguin disavow question came up.

So I guess first thing to keep in mind is that Penguin is a web spam algorithm in general, it’s not just specific to links, we look at web spam overall, so we try to figure out what we need to do to when it comes to web spam there.

And if these are problematic links that are affected here, and you use a disavow file, then that’s a good way for us to pick that up and recognize okay this link is something you don’t want to have associated with this site, so when we recrawl that page that is linking to you, we can drop that link from our link graph.

With regards to devaluing these low quality links instead of punishing you, in general we try to figure out what kind of spammy tactics are happening here and we say well, we’ll just try to ignore this part with regards to your website.

Someone then asks whether disavows should be removed from sites, since Penguin devalues those links.  Some SEOs have been considering or recommending removing disavows  since real time Penguin launched.

If this is something you really don’t want to have associated with your website, then you should keep that in your disavow file.  So that’s not something where I’d say for this one specific algorithm, Google is able to kind of devalue those and handle them on their own, therefore I won’t tell Google anything about these problematic links I found, I think that’s a bad idea.

So I’d keep the disavow file, I’d use the disavow file for any links that you really don’t want to be associated with, and then your assured they’re not taken into account across the board.

What about the disavow files that you currently have uploaded?  He was also asked whether site owners should keep their disavows or prune them of any links.

I’d personally just keep it the way it is before.  I know there’s some sites that have gone in and said okay, we’ll just disavow everything that’s been linking to us, and that was probably a bad strategy before and just as bad strategy now and that’s something you might want to clean up.  But in general, if you were using the disavow file for what it was meant to be used, I would continue to use it like that.

There has been a lot of talk about the disavow lately, particularly surround the fact Google can devalue Penguin links now, but Mueller is clearly saying that SEOs should continue using the disavow tool when they know they have spammy links from previous link building to the site.

There is also the reason of manual actions – Google can still use any non-disavowed links for analysis when it comes to placing a manual action on any site for bad links.  And Google has said that link quality is used in other parts of their search algo as well.

A Google spokesperson confirmed to The SEM Post that there are no changes to the disavow with the real time Penguin launch.  And both Gary Illyes and John Mueller have confirmed the same.

So, when it doubt – and to prevent future manual actions – use the disavow.

We finally have the first Google Quality Rater Guidelines update of 2022, and like usual, it is … END_OF_DOCUMENT_TOKEN_TO_BE_REPLACED