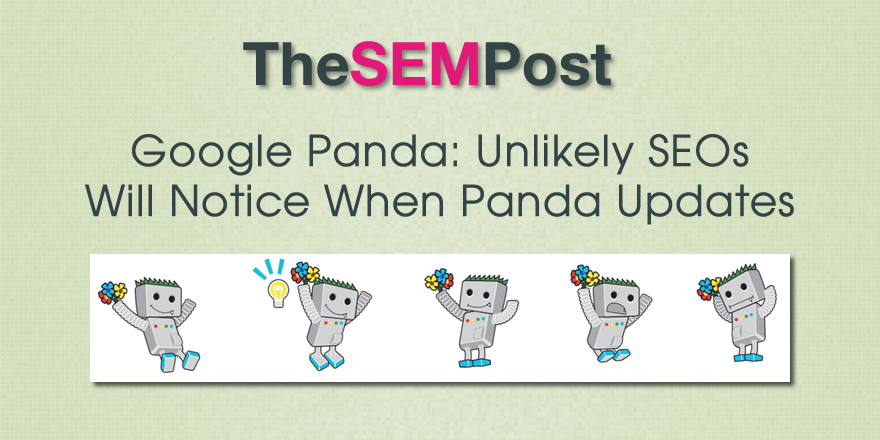 There has been a lot of discussion recently about Google Panda recently and how frequently it is updated now that it is a core ranking signal.  While Gary Illyes confirmed that Panda is not real time, there wasn’t any specifics given about how frequently it updates, only that what we have been seeing fluctuating in the search results this week were not a result of Panda.

But in today’s Webmaster Hangout, John Mueller revealed a lot about the frequency of Panda going forward – the fact that SEOs won’t likely be able to tell when one Panda rolls over to the next update of it, and we won’t be able to see the cycle change.

As part of the core algorithm, you probably wouldn’t see those kind of updates happening.  That’s something that’s just kind of rolling along, so it’s not so much like in the past where you’d see on this date, this actually changed, we updated that.

So that’s something kind of something as a more rolling algorithm you wouldn’t really see the individual cut dates of specific parts of the data.

He was then asked if it would ever be real time.

It’s not real time in the sense that we crawl URLs and have that data immediately.  So it’s something we kind of have to bundle together, understand the data, and have that updated. And we do that on more a rolling basis now so that when one is finished, the next one kind of starts.  So it’s real time if you look at a really big scale in that things are happening all the time, but it’s not real time in the sense that every second there is a new value that’s being produced based on new a new data point that we have.

He was then asked how long the rolling periods were, but he didn’t go into any more detail other than SEOs won’t notice it.

I think what you would usually see is that this is just kind of a subtle move from one to the other as things kind of roll out.  So it’s not that you would even notice this cycle.

This isn’t that surprising since the most recent Panda has been on such a slow rollout that nobody even realized when it started until Google later confirmed it.

Does this mean we have seen new “cycles” of Panda since the initial last known roll out?  Possibly, although if it has, no one from Google has confirmed it.  And since even the various Google weather report tools such as Mozcast failed to pick up when the last one did begin rolling out, I wouldn’t be surprised at all if we don’t notice the cycles changing.  This was one of the reasons why I was fairly certain the recent search changes weren’t Penguin or Panda, despite many posting the news as “confirmed” despite no evidence other than search result weather reports.

This also means that not having known cut dates going forward will make it harder to identify Panda hit sites.  That said, many Panda hit sites are quite obvious when you look at the quality of the content, and one of the “go to” things that SEOs should be doing to improve rankings on sites that have either lost rankings or are seeing them drop is to increase the quality of the content to make it as good, if not better, when compared to competitor’s sites.

We finally have the first Google Quality Rater Guidelines update of 2022, and like usual, it is … END_OF_DOCUMENT_TOKEN_TO_BE_REPLACED