You are here: Home / Google / No Google Ranking Advantage to Removing Older Content 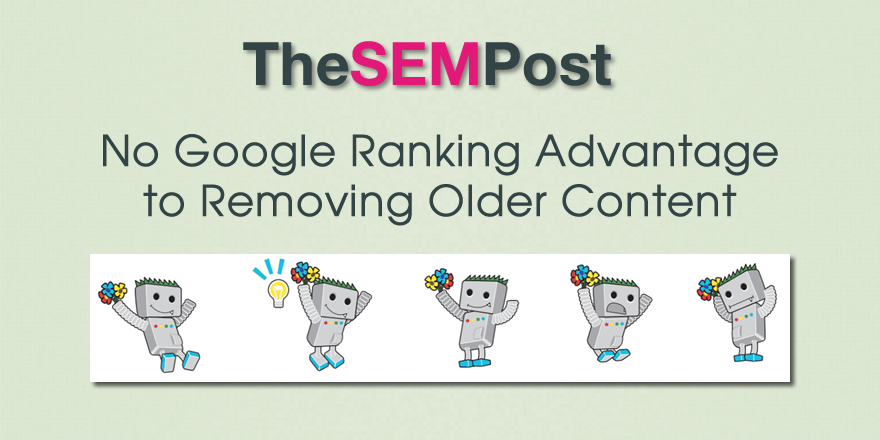 There has been a trend by webmasters to remove older content because many feel that it is a signal to Google that the site might not be of high quality.  Others believe older content impacts Panda and remove it as a Panda preventative.

We have a huge amount of content, obviously I know it all won’t be indexed, so would there be potential ranking benefit from removing content older than 2 years old?

This is something I hear a lot as well, but it isn’t the magic factor in ranking or beating Panda that some believe it to be.

Here is what John Mueller had to say about it:

I don’t think there is a big ranking advantage to removing older content.  Sometimes this is content that is caluable to keep in the search results anyway so just because its old doesn’t mean it’s bad content.

I think there’s two aspects there that you might want to take a look at though.  On the one hand, if there is a lot of content that you have like this, then it could be affecting your crawl rate, in that if we waste a lot of time crawling content on your site and we miss the new content, then that’s probably not that great for you.  So that is something you could however kind of handle on a technical way and say well my website has grown over the years, therefore I need to make sure my server is able to handle the load and then we can probably crawl normally.

The other thing that might come into play is if this older content is really terrible, old and crufty content, that you wrote before you realized you need to kind of focus on quality as well, then that’s something where you either need to make a cut or say well, I don’t really want to keep all of this old content because it is really not all that great, or where you might want to say well I’ve learned a lot over the years and I want improve this old content to make sure it’s really high quality and remains relevant.

But that’s more something from a general quality point of view, but with regards to this question, just removing old content doesn’t automatically cause a ranking advantage.

This is something various Googlers have stressed multiple times… just because content is old, doesn’t make it bad.  In fact, evergreen content – something many strive for – is technically considered old content too.  And featured snippets don’t favor newer content over older content either.

It really comes down to quality.  There are some amazing articles on the web that were written many years ago, just as their are many low quality articles publishered recently.  So focus on the quality – if it needs updating, go ahead and update it.  But if some would still find it valuable, and if Google is sending people to it, you would be making a mistake and actually devaluing your site if you were to remove it.

We finally have the first Google Quality Rater Guidelines update of 2022, and like usual, it is … END_OF_DOCUMENT_TOKEN_TO_BE_REPLACED