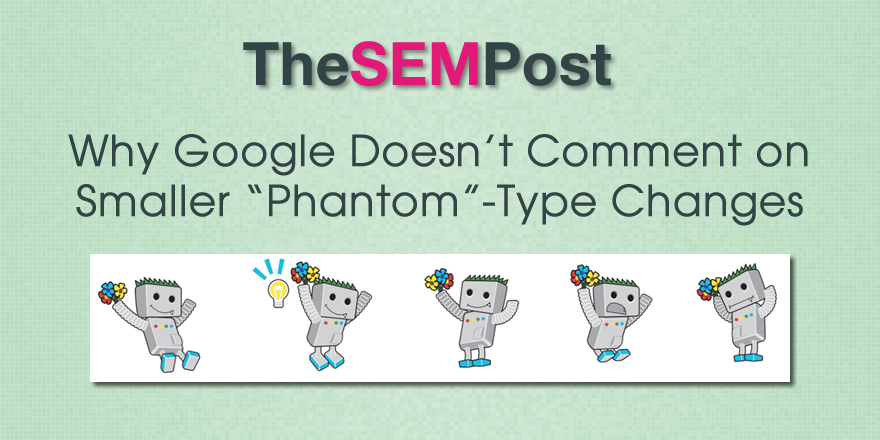 There has been a lot of chatter over some of the fluctuations people noticed last month, particularly the one on the 19th, and John Mueller was asked about it specifically in today’s Google webmaster help hangout.

While many in the industry agree that this is one of the regular core algorithm changes – one of hundreds that Google does every year – rather than something major like Penguin or Panda, many people are still curious about what specific change happened so they can try and either bounce back from lost rankings or continue to gain ranks if they saw improvements.

When you consider Google also makes hundreds of these changes per year, it goes without saying that many of them are not noticeable at all or are barely noticeable, but only to a small segment of SEOs and/or webmasters.  So why does Google only comment on a small fraction of them?

While Mueller didn’t go into specific details on last months changes, he does talk a bit about why they don’t always comment on various core algo updates.

First, he comments specifically on the 19th changes.

I don’t think we have anything to announce.

Not really surprising since Google has not said anything specific about the changes on that date.  But he continues to talk about the way Google makes changes and why they don’t announce every single change.

We do make updates all the time and sometimes these updates are more visible than others.  But its not that we give external names or announce all of these changes.  So I imagine what you are seeing there is just one of the updates made over time with regards to search quality and its not that I would be able to say well no you are not seeing this update or yes you are seeing this update.

So from our point of view, we try not to make too much of a fuss about a lot of these updates because they are just essentially just our work as usual.

It’s always kind of tricky for us when we see a lot of people talking about something externally, and we’d like to say well, it’s this specific change and it comes from this and that, but a lot of these changes don’t have any clear source or clear actionable effect that we can say well, this means you need to improve your keywords on your pages so we think that they actually look better, because we try to focus on the final results on the relevance for the user.

I know a lot of SEOs would like to know every little change Google does, primarily for reverse engineering reasons so they can rank better.  And I suspect sometimes Google is surprised by what SEOs notice and don’t notice.  For example, RankBrain seemed to have gone largely unnoticed until it was announced after being in play for many months, but what was later called the Quality update was one of these regular changes Google makes that ended up being quite noticeable because of its impact, and which they later confirmed.

It is interesting his comment about certain niches noticing changes, especially as we have seen certain industries impacted more by some changes – such as we have seen with the Pirate algo or the Payday loan algo.

So we likely won’t see Google announcing many of these regular random core algo changes, unless it is Quality update impact, but it is always interesting to hear Google’s reasoning about why they don’t.

Google has released a new version of the Google quality rater guidelines, a year after the last … END_OF_DOCUMENT_TOKEN_TO_BE_REPLACED