You are here: Home / SEO / Why Wikipedia Went Secure & Why All Websites Should Do The Same 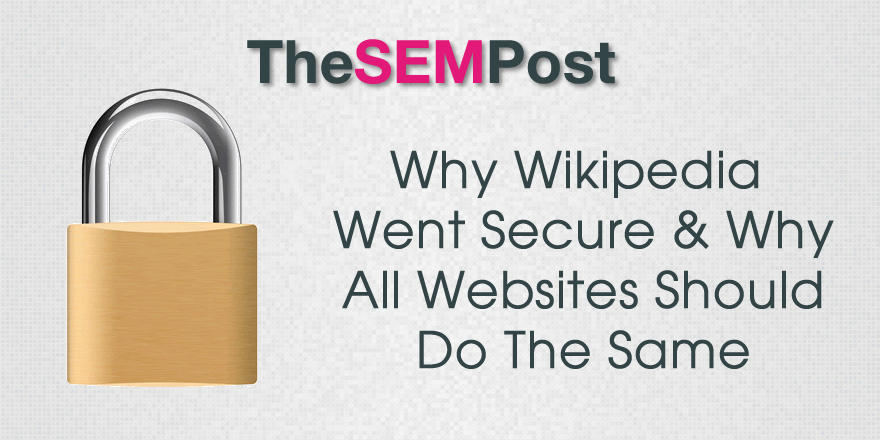 It has been no secret that Google has been pushing hard to see more websites go secure, complete with the HTTPS ranking boost to encourage more sites to do so.  Jimmy Wales was recently interviewed and contributed some of his own thoughts on why encryption is so important, and gives insight into why more webmasters should go secure.  And in fact, he also wants to see every site encrypted.

He feels it is crucial for newspapers to go secure in order to support freedom of speech and freedom of expression.

“If you’re a newspaper that cares about freedom of expression and freedom of speech, it’s probably not good to allow the government of the Maldives to be profiling people in their communities based on what news stories they’re reading, and if you aren’t secure you’re allowing that to happen – it’s a really important point,” he says.

New York Times also published an opinion piece last year urging news sites to go secure, although ironically, they are not yet secure themselves.

Along with news, going secure means governments cannot know what news articles people are reading within their country, and target them because of it.  This was actually a driving force behind Wikipedia’s decision to switch to SSL.

It’s a common misconception that SSL is only important when websites are handling private data, however this was not the reason Wikipedia was transitioned.Instead, it was the ability for governments with poor human rights records to tell when citizens were reading articles covering controversial or anti-government topics, and arresting them as a result. It may seem like something out of dystopian fiction, but Wales is adamant that this situation occurs, and says he is aware of particular Wikipedia editors being affected.

Another aspect people might not be aware of is that HTTPS means that specific pages on a site cannot be blocked.  So a country would be unable to censor specific results on a page.

This is also the reason Wales believes that China blocked Wikipedia again, since they could no longer censor citizens from specific pages on the site.

The reason for this sudden re-blocking is likely to be that under SSL, China wouldn’t have the option to selectively block particular Wikipedia entries: it forces the country to take an all-or-nothing approach.

Going secure means that while someone could see that a person is on Wikipedia, they are unable to determine which pages they are actually visiting.

“With https, the only thing that the Chinese authorities can see today is if you’re talking to Wikipedia or not, they can’t see which pages you’re joining, which means they no longer have the ability to filter on a page-by-page basis, so they can’t block just Tiananmen Square,” says Wales. “They now have a very stark choice: the entire country of China can do without Wikipedia, or they can accept all of Wikipedia.”

The article is a fascinating read and raises some interesting points about why websites need to be going secure.

We finally have the first Google Quality Rater Guidelines update of 2022, and like usual, it is … END_OF_DOCUMENT_TOKEN_TO_BE_REPLACED