You are here: Home / Google / Most 404 Errors in Google Search Console Not Site Owner’s Fault 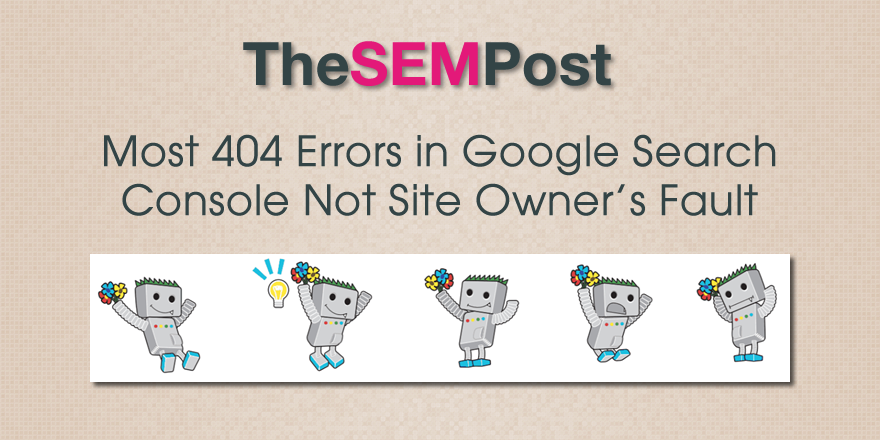 Many people hate when 404 errors pop up in their Google Search Console account.  While this is something we most often see when a site is hacked, the 404 error report can also be a treasure trove of information when doing a site redesign, URL structure change or when going from http to https, to see where there might be issues.

But because the 404 error report can show all kinds of things – such as when your site is hacked and the hacker points a ton of links to those hacked pages, or simply when someone linked to your site and incorrectly linked the proper URL – many people view 404 errors as potentially being a quality or ranking issue.

First, Google has made it clear that 404s do not cause either a ranking or quality issue.  After all, if this was the case, competitors would just trigger 404 errors on other sites in their space all day long.

The topic came up with a change Google made last year where Google would attempt to find a mobile version of a site that wasn’t mobile friendly by crawling commonly used URLs for the site, such as mobile.example.com, m.example.com, example.com/m/ and example.com/mobile/, because not all site owners might have correctly implemented their mobile site structure so that Googlebot was aware of it.  And these were showing up in some 404 error reports and causing concern.

John Mueller tweeted a response about it, and one of the interesting things he said is that most 404 errors are not the site’s fault.

I agree here, hiding 404 errors, regardless of how Googlebot found them, is a bad idea, because you never know how some might find these various types of errors useful.  For example, some people discover their site has been hacked by hackers linking to their hacked pages incorrectly.  And some might go and add a 301 redirect to links that are incorrectly linked to a 404 page, so that visitors clicking the link get the page they want, and so the site benefits from the value of the link.

That said, they can be annoying since there is no way to clear them though, especially since sometimes those 404s stick around for a long time.  And for best practices, you always want to keep an eye on those errors in case something did go wrong on the site’s end, such as when doing a URL structure change or a site redesign.

So when looking at your 404 errors, don’t think of it from the perspective that the site has done something wrong or wish Google wouldn’t show them, but rather take from it the value that is there.

We finally have the first Google Quality Rater Guidelines update of 2022, and like usual, it is … END_OF_DOCUMENT_TOKEN_TO_BE_REPLACED