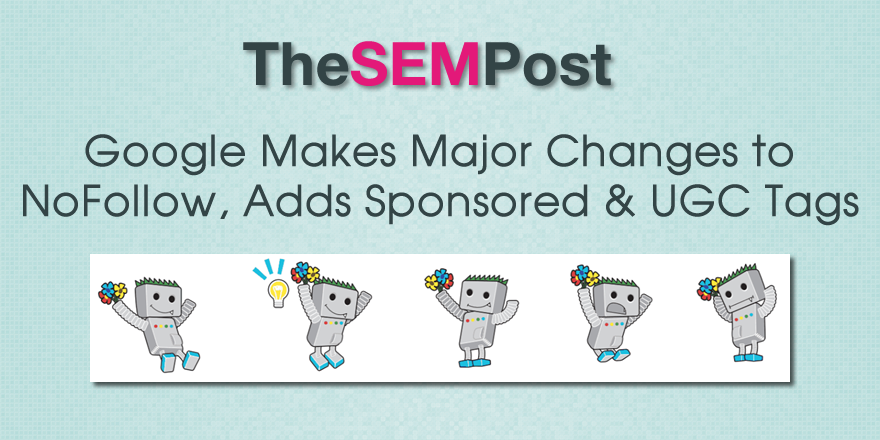 Ever since Google introduced the nofollow link attribute, as a way to help webmasters disavow links they did not want to pass PageRank to, it has been used for many different things. First, it was used specifically for sites to be able to link to sponsors, but without worrying about receiving any link based manual actions for doing so. Then it evolved to site owners using it so that Google would not follow any internal links, primarily for crawl budget reasons.

But as a consequence of websites being concerned about links actually being somehow sponsored because an author was paid for those links on the side, many sites began nofollowing every external link, rather than deciding on a per link basis if it should be nofollowed or not. And obviously for Google who relies heavily on links for their ranking algorithms, this is problematic.

Google has responded to all these new usages of the nofollow attribute by launching two new link attributes that on the surface work the same as nofollow – sponsored and UGC – as well as adjusting how it crawls nofollow links in the future.

Nofollow Changing to a Hint

Effective immediately, Google is making the no follow attribute as a hint when it comes to “which links to consider or exclude within search”.  They also added they are using these hints, along with other ranking signals, “to better understand how to appropriately analyze and use links within our systems.”

When it comes to how Google crawls links with nofollow attributes, on March 1, 2020, Google will be making the change that nofollow will be used as a hint for crawling purposes as well.

The reason for the change is for Google to provide better analysis on links, and they specifically state this in their new blog post.

Using the new attributes allows us to better process links for analysis of the web. That can include your own content, if people who link to you make use of these attributes.

Google seems to be implying that links that are tagged with anything other than sponsored could potentially still pass PageRank or count as credit in some other way.  Could it be considered as merely a mention, something that has become popular with the idea surrounding EAT?  The way Google has worded this leads credence to that theory.

What happens if I use the wrong attribute on a link?

There’s no wrong attribute except in the case of sponsored links. If you flag a UGC link or a non-ad link as “sponsored,” we’ll see that hint but the impact — if any at all — would be at most that we might not count the link as a credit for another page. In this regard, it’s no different than the status quo of many UGC and non-ad links already marked as nofollow.

It is an issue going the opposite way. Any link that is clearly an ad or sponsored should use “sponsored” or “nofollow,” as described above. Using “sponsored” is preferred, but “nofollow” is acceptable.

Now, why should a webmaster use any of these new attributes versus the current nofollow? Google says that you are not required to use the new ones, although they suggest you do, which raises a question about why a webmaster would bother making this change.  Especially for larger sites, this would be a huge undertaking. And CMS etc would have to be changed that would allow site owners to tag links with these two new attributes.

It is worth noting that the UGC attribute that Google wants site owners to use is not referring to articles and content that are being written for the site, such as from contributors.  But instead this is specifically for things like comments or form posts, as opposed to guest written main content.

The change to Google considering nofollow as a hint next year does raise some concerns about spam.  If it is now merely a hint instead of a “absolutely do not count this link for PageRank or anything else” as it currently stands, it means sites that do allow comments, forum posts or any kind of user generated content, could see spamming go up significantly. Google says that they don’t believe spam will be an issue, but if there is the potential that links could count under the new hint model, and hit sites hard. For this reason, site owners might want to ensure those links are tagged with UGC instead of just nofollow, in case some spammers auto check the attribute being used on a site.

They also say that “in most cases” the move Google is making to the hint model won’t change how they treat some links. But this definitely leaves it open that there are some scenarios where Google will take into account some value in these links, or it is on the roadmap for the future.

I asked Google specifically whether there will be any negative impact for sites for using nofollow rather than sponsored. A Google spokesperson said that there would be no impact and using either is fine.

Will webmasters actually adopt these new tags?  I would be surprised see many swap over all there nofollows to ones that might be more applicable to each link. For example, would having a site with many links tagged as sponsored potentially affect its rankings, either now or in the future?  Could it be used where Google would not include content for a featured snippet if there were links within it that are tagged sponsored?

I think the biggest change will see his those using nofollow for crawl budget purposes.

We finally have the first Google Quality Rater Guidelines update of 2022, and like usual, it is … END_OF_DOCUMENT_TOKEN_TO_BE_REPLACED