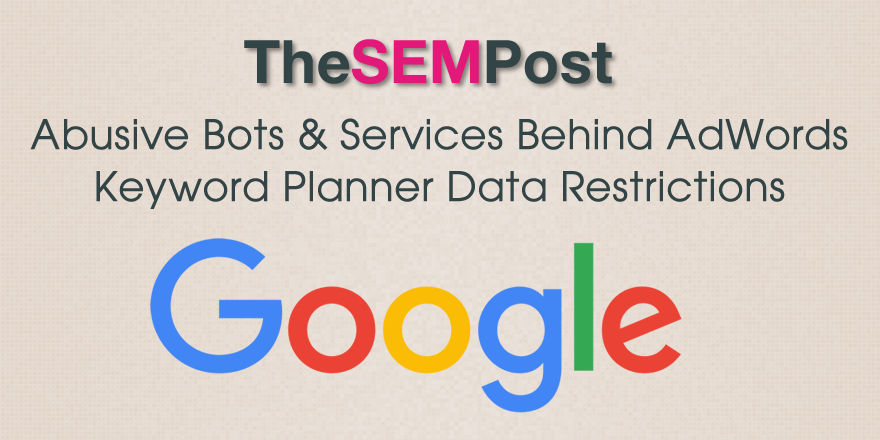 It appears as though we now know the reason that Google made the recent Keyword Planner Tool changes that sees some advertisers and SEOs see restricted data instead of detailed data – it was to prevent bots and other services from abusing the intended use of the Keyword Planner.

In a response to multiple people on Twitter about the new estimate ranges for keyword data, AdWords confirmed that abusive bots was at least part of the reason behind the change.  Here is the tweet:

In addition, the changes will prevent “bots” and other services from abusing the intended use of the Keyword Planner.

From a business perspective, it does make sense that Google would provide more generalized data to some users as a response.  And advertisers had been complaining about the stability of the tool due to errors when using it.  Since Google made the change, I haven’t seen anyone complaining about the errors.

There are some SEO and keyword tools that are impacted by this change.  So the change Google made seems to be solving some of the issues with the bots they feel are abusing the tool.  But other tools are reporting business as usual, without any issues.

Since this was the reason Google restricted the data, it is unlikely we will see them reverse position on this.  We still don’t know what the required ad spend is for the detailed data to show instead, but those with lower budgets will also see the restricted data.  There is also a restriction on the number of queries that can be performed as well.

@matthewgagen Hi Matt, these changes will ensure advertisers continue to get the data they need to optimize their accounts. (1)

@matthewgagen In addition, the changes will prevent “bots” and other services from abusing the intended use of the Keyword Planner. (2)

@matthewgagen Although estimates may show differently for those with lower spend, it’ll still provide an accurate view of data. -Spence (3)

Google has released a new version of the Google quality rater guidelines, a year after the last … END_OF_DOCUMENT_TOKEN_TO_BE_REPLACED