You are here: Home / Pay Per Click / Ad Block Plus to Set Up Independent Board to Determine Acceptable Ads 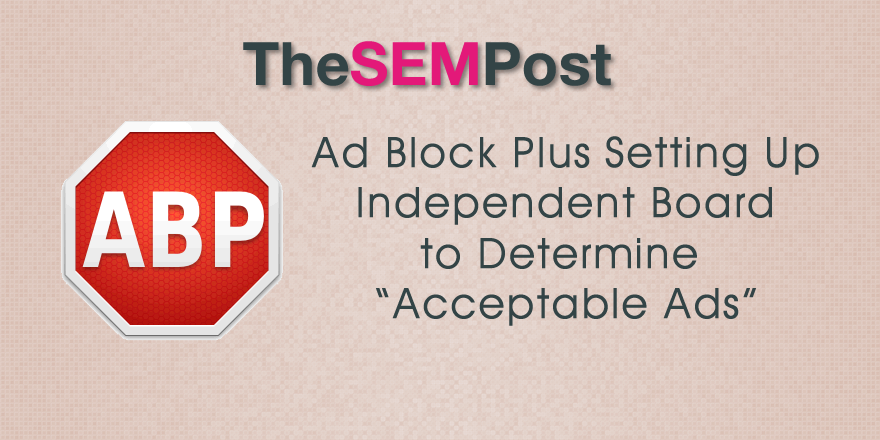 Ad Block Plus is making a major change with how it decides what ads get blocked and what ones remain unblocked.  Until now, their decision to decide what to unblock had a lot to do with companies that pay them to unblock ads.

Eyeo GmbH, the parent company of Ad Block Plus, is setting up an independent review panel which will be responsible for determining what types of ads are “acceptable” and will be unblocked.  According to a report in the Wall Street Journal, it will set up the board in the first half of 2016 and will have both advertisers and publishers, as well as marketers and consumers.

“Users determined the original criteria and can object in our forum to whitelisting proposals, but since we were the only ad blocker to offer such a compromise we have taken on a large role in the day-to-day maintenance of the criteria,” read a prepared statement by Till Faida, co-founder of Adblock Plus. “We have been looking for a way to make the Acceptable Ads program completely independent while also updating the criteria to evolve with changing forms of online advertising. An independent board solves both issues.”

Many people have raised questions over their practice of accepting payment for unblocking ads – with Taboola often referenced as an example of ads that many feel should be blocked due to their tendency to link to pages filled with more “ads” and “stories” of dubious quality.  Ad Block Plus accepts payments from 70 of the 700 companies they currently unblock ads for.

The new independent board will also be able to change the current guidelines that Ad Block Plus uses to determine what is an acceptable ad, so we could see the current “rules” tightened up even more.