You are here: Home / Pay Per Click / Adblock Plus Wins Another Case Supporting Legal Use in Germany 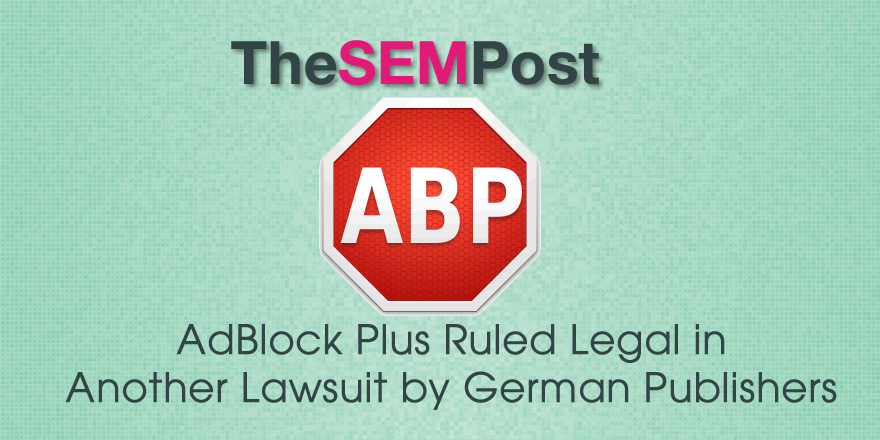 Hot on the heels of another ruling that said users have the right to block ads using Adblock Plus if they wish, we have another ruling, this time filed by a different set of publishers.

This time, the lawsuit was brought about by RTL Interactive and ProSiebenSat1, two German broadcasters, against Eyeo, the makers of Adblock Plus.

An Eeyo spokesperson provided a statement to The Guardian and declared it “another win for every internet user.”

“This is the fourth time that massive publishers have brought legal proceedings against our startup,” it added. “But even with expensive lawyers and bottomless pockets, this was a clear case of users’ rights – so we felt it was the right time to stand up and draw a line in the sand. Thankfully, the court sided with users and with compromise.”

“So we’re pleased to say that Adblock Plus will continue to provide users with a tool that helps them control their internet experience. At the same time we will endeavor to work with publishers, advertisers and content creators to encourage nonintrusive ads, discover new ways to make ads better and press forward to a more sustainable internet ecosystem.”

Eeyo also posted to the Adblock Plus blog regarding the ruling.

The previous lawsuit was brought about by two German publishers, Zeit Online GmbH and Handelsblatt GmbH, who argued that Adblock Plus was hindering their ability to earn revenue from Adblock Plus users.  However, German court ruled that users can decide what appears – or more importantly, does not appear – on their computer screens.

AdBlock currently claims it has 50 million active users worldwide, so it does definitely put a dent in some publisher’s revenues.  However, many argue that publishers should work to create ads that are less annoying and distracting to users, so they would be less likely to use a product such as Adblock Plus, something that Adblock itself supports.

RTL says they are exploring appeal options, according to a statement sent to Business Insider. “We are weighing a possible course of action against the ruling and assessing the prospects of an appeal.”  ProSieben is also reportedly considering an appeal and further legal action in a statement provided in German.

There is still one more case currently winding its way through German courts, this one a lawsuit brought about by German publisher Axel Springer.

We finally have the first Google Quality Rater Guidelines update of 2022, and like usual, it is … END_OF_DOCUMENT_TOKEN_TO_BE_REPLACED