You are here: Home / Google / Automated Queries From SEO Tools Against Google TOS 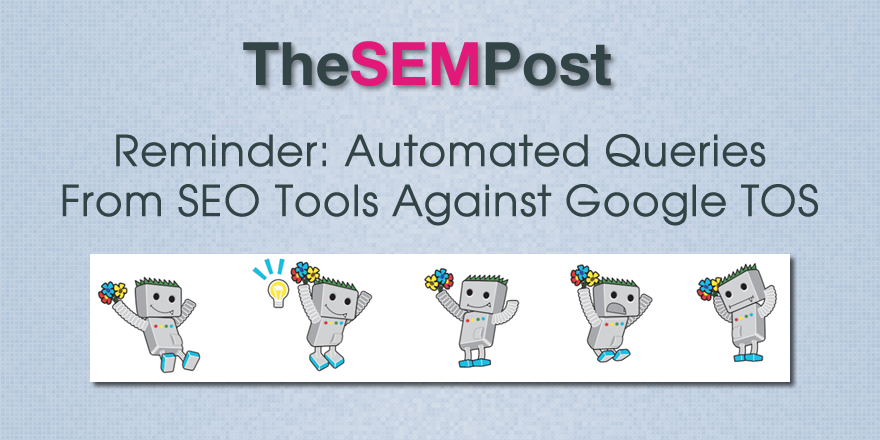 Gary Illyes from Google has another reminder that using tools or services that send automatic queries to Google – such as to check rankings or indexing – are against the Google TOS.

Periodically, new tools that get released will run up against Google’s terms of service (and against the terms for Bing as well, and probably many other search engines too).  And it seems that a new SEO tool released this week is doing the same.

Friendly reminder that sending automated queries to search engines are generally against their Terms of Service.

There was an SEO

Now, the violation of Webmaster Guidelines is an interesting thing – it actually wasn’t in there when Google wrote the original, but it has been there for many years now.  But there are many old school SEOs with stories to tell about using WebPosition Gold and subsequently getting banned by Google for those sites they were using it on, however, that was fifteen or so years ago, and I am not aware of any other tools resulting in Google taking that extreme action.

So if you have tools that scrape Google for data, you could get hit for something, but it would likely only be either a temporary IP ban or the tool breaks.

When it comes to SEO tools that scrape data, such as those that track rankings or features on a larger scale, most/all are in violation of this.  But they use enough randomized IPs for data scraping to prevent Google from being able to track their tool’s queries.

@greenlaneseo Is this a blackhat tool or does it abide by the webmaster guidelines & robots.txt? (just curious)

Someone from the company later said it uses a Google API, looks for the results in the search results, and that it doesn’t use scraping.  It could be using the Google Custom Search API.

Google has released a new version of the Google quality rater guidelines, a year after the last … END_OF_DOCUMENT_TOKEN_TO_BE_REPLACED