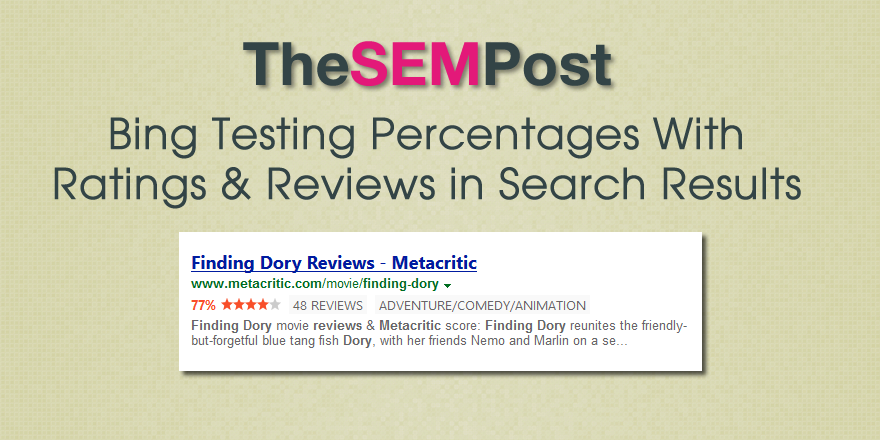 Bing is running an interesting test in the search results, and for a minor change, it really stands out when I see it.  They have added the addition of a ratings and reviews percentage score, in bright orange to match the color of the stars.

Here is an example for a reviews site:

And here is another example with it, this time with the ratings markup.

However, it doesn’t look nearly as impressive when it is a low percentage.  Here is an example of a reviews shown as a lower end percent.

I couldn’t find an example of the ratings with a lower percentage, as they seem to have a threshold before they will show markup.

It is also showing for some local reviews related search queries as well, so local businesses will want to keep an eye on it, if Bing transitions these percentages across a wider selection of local searches.

Showing percentages is something that Google has also done, but they don’t have nearly the same effect as the orange version in Bing’s search results.  Here is Google’s example when they show a percentage:

This doesn’t appear to be full scale test for Bing, but it seems there are a handful of sites that are testing out, and those sites are entirely in percentages for their reviews and ratings.

We finally have the first Google Quality Rater Guidelines update of 2022, and like usual, it is … END_OF_DOCUMENT_TOKEN_TO_BE_REPLACED