Just when you thought emojis in search results couldn’t get any more annoying, some SEOs have discovered that they can use specific combinations of characters to display the URL in emoji format.

This was actually part of an ad campaign by Norwegian Airlines.  They converted a domain name into emoji format, then built their ad campaign around people trying to figure out what the true domain actually was.  It was launched via influencers on Instagram, such as this one:

The side effect however, is that Google and Bing are indexing the URL, and when it shows up in the search results, they are both displaying it in emoji form.

Here it is how it appears in the Google search results:

And in Bing, where it only shows the first emoji but the unknown character box for the other two:

But the full colored versions appear to be only viewable on Macs or on iOS. 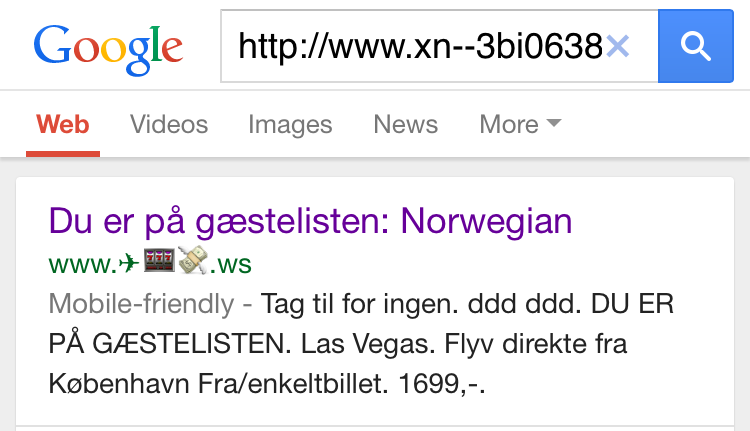 Cyrus Shepard from Moz discovered it was actually punycode that enabled the conversion of URL to emoji.

Apparently, Google may display Emoji in your domain name if you convert it via PunyCode pic.twitter.com/03E7an2yN3

Then he took it a bit further and registered his own domain that was converted into punycode, using the code for 5 stars in a row.  Then he got his five starred domain into the search results in less than half an hour.

In less than 30 minutes, Google allowed me to index a 5-star domain made with Emoji. pic.twitter.com/uGWI5Dj4LR

As Shepard notes, they seem to be restricted to non-TLD, such as .ws.

One interesting thing to note is that Chrome appears to have deprecated these stars from showing.  Here is how it looks in Firefox: 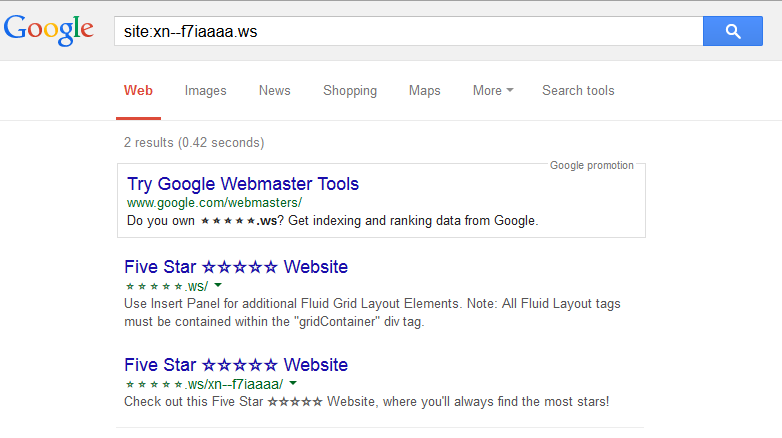 But in Chrome is only shows the unknown character boxes. 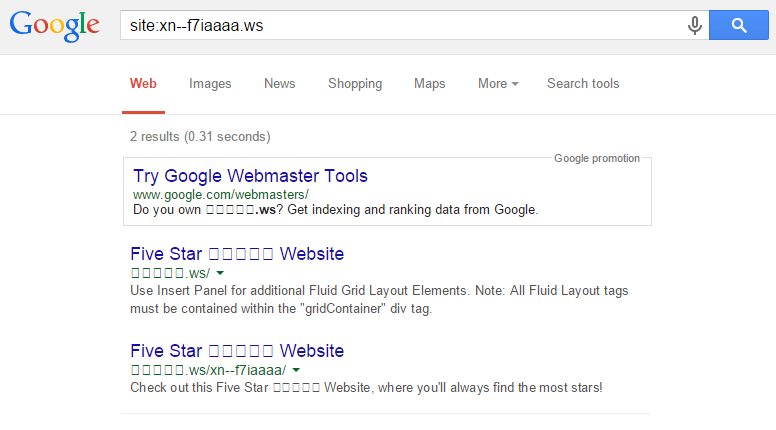 Chrome still shows other emojis, such as the ones Expedia is using.

The stars show in full color, such as in Shepard’s tweet, in iOS and on Macs.

At SMX Advanced last week, Gary Illyes was asked about the emojis in search results issue and asked when we would see a fix for it, and his response was hopefully soon.

I suspect that now people realize that URLs can be displayed in emoji in Google and Bing that we could see an influx in emojis showing up again.  And more people would be likely to try it since the emoji problem hasn’t been fixed despite Google stating they would be removed over a month ago, a reason why many SEOs didn’t play around with it.

Hopefully emojis in the display URL won’t stick around for too much longer, along with the ones showing in titles, as I can imagine them getting annoying pretty quick if people manage to start ranking with them.

We finally have the first Google Quality Rater Guidelines update of 2022, and like usual, it is … END_OF_DOCUMENT_TOKEN_TO_BE_REPLACED