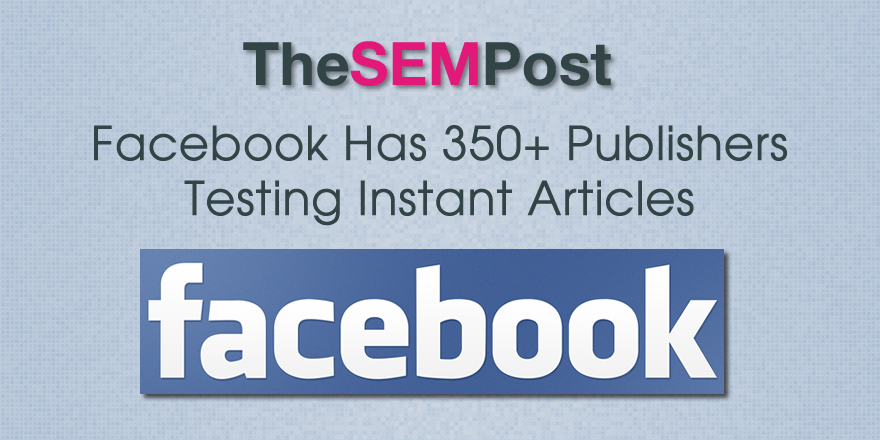 If you have been wondering how Facebook’s Instant Articles test is going, they published a list detailing just how many publishers are using it, and surprisingly, there are over 350 of them.

This is quite a number, considering in November there were only twenty publishers enrolled in the program.  And they have expanded the program to include publishers targeting a wide number of countries, not just the US.  Both India and Germany have over 25 participating publishers now, while the US has dozens of publishers.  In the US, this includes big names such as New York Times, National Geographic and even Buzzfeed.

Facebook made the announcement in conjunction with the news that Instant Articles is now available for Android, after initially launching for iOS earlier this year.

Instant Articles has been quite controversial due to the loss of ad revenue by those sites participating it.   According to a report last month in the Wall Street Journal, publishers are severely restricted in the number of ads, as well as the size and type, that they can display in these Instant Articles.

That’s because of the strict guidelines Facebook has laid down on the type and volume of ads publishers are allowed to sell. For example, the guidelines state that just one “large banner” ad sized 320 x 250 pixels may be included for every 500 words of content. On their own mobile properties, publishers such as The Washington Post would typically include three or perhaps four of those ads alongside a 500-word article.

Facebook is also restricting the type of ads publishers may place in Instant Articles. It will not allow so-called “rich media” ads, the animated or interactive ads that now commonly appear across publishers’ sites.

But it would appear Facebook is working to “advance the product based on their feedback” from participating publishers to promote the product.

You can find the complete list of current participating publishers here.

Google has released a brand new version of the Quality Rater Guidelines, the third one this year.  … END_OF_DOCUMENT_TOKEN_TO_BE_REPLACED