You are here: Home / Facebook / Facebook Users Can Report Hoaxes and Fake News Links, Reducing Organic Exposure for Those Links

Facebook is making a new change that will allow all users to report fake news stories or hoaxes that tend to get posted over and over again on Facebook.  And when reported multiple times, those stories will see reduced exposure in Facebook user’s news feeds.

When a Facebook user reports that they feel a post shouldn’t be on Facebook, it brings up a selection option which allows the user to let Facebook know what specifically is wrong for posts. And the new reporting option is “It’s a false news story.” 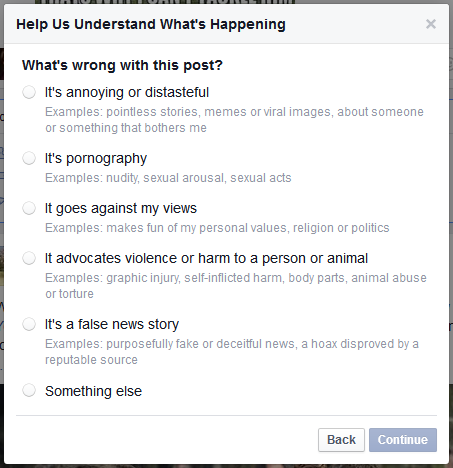 Facebook also notes that when people post a fake news story or a hoax, once people began linking to sites such as Snopes in the comments, the user that originally posted the link is two times more likely to delete that original post. Facebook will not be proactive in doing anything to remove these posts, but those posts and links are going to targeted algorithmically, showing it to fewer people when many people reporting its as either a false news story or deleting it from their news feed.

But if many people are reporting a specific link, Facebook may annotate the link by including “Many people on Facebook have reported that this story contains false information.”

This of course raises the question about whether people are going to reporting all kinds of things as fake, simply because it goes against their beliefs whether that be political, religious or personal. It wouldn’t surprise me for things that are more controversial to get flagged by people with opposing viewpoints, simply to reduce it’s exposure or to gain the “false information” flag above it.

It is unclear how satire sites might be affected. People can report them as being fake news stories, but for a site like the onion, many people share those stories because it is satire and not because they believe it. But it’s Facebook does say that they found during testing that people don’t tend to report satire, because they know it is satire and not real.  Facebook already marks some site’s stories as satire when they show up as related stories on Facebook, after change they made last year.

Overall, Facebook feels that only a small set of publishers who tend to post many hoaxes and scams to be affected by this change.

Google has released a new version of the Google quality rater guidelines, a year after the last … END_OF_DOCUMENT_TOKEN_TO_BE_REPLACED