Facebook has finally given users the ability to embed their Facebook videos on third party sites, a major feature they were missing that saw them lagging behind industry leader YouTube.

YouTube makes it easy for users to embed YouTube videos on any website, meaning it is easy for people to embed most videos on a news site, blog or other content site.  Facebook has now finally followed suit by giving Facebook users the ability to embed a video uploaded to Facebook by pasting an embed code into a webpage, although this does come fairly late in the game for the social media platform that has been pushing video views hard this year. 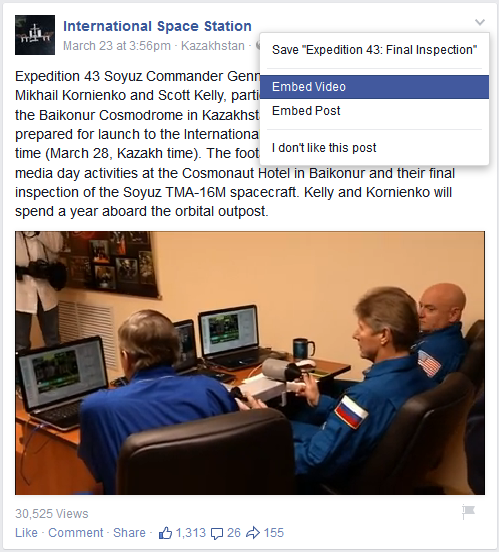 You will then see a window pop up that includes the video along with the embed HTML code you can paste into a website. 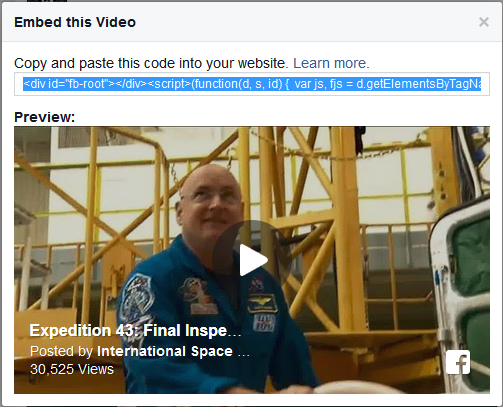 Unfortunately, according to reports, the embedding feature doesn’t work well in standard WordPress.  It works for me in the text editor of WordPress., however sizing seems a bit off. I have pasted a video below, and the size scale is a bit larger than expected.

Expedition 43: Final InspectionExpedition 43 Soyuz Commander Gennady Padalka with Flight Engineers Mikhail Kornienko and Scott Kelly, participated in a variety of activities at the Baikonur Cosmodrome in Kazakhstan on March 21 and 23 as they prepared for launch to the International Space Station on March 27 U.S. time (March 28, Kazakh time). The footage includes the crew’s traditional media day activities at the Cosmonaut Hotel in Baikonur and their final inspection of the Soyuz TMA-16M spacecraft. Kelly and Kornienko will spend a year aboard the orbital outpost.

The embed code is ridiculously long, in part because it includes the plain text of the content that is posted along with the video – content that is not displayed on page.  Here is what the code for the above video looks like.

So while the feature is nice, it could definitely use some work.

This is the last main feature that Facebook was lacking when compared to YouTube.  However, accessing the embed interface is still a bit clunky – it doesn’t appear under the “Share” link for example, where many people will look for it.  But I expect we will see Facebook encouraging sharing Facebook videos beyond Facebook in the near future, after they work out issues as people begin using it.