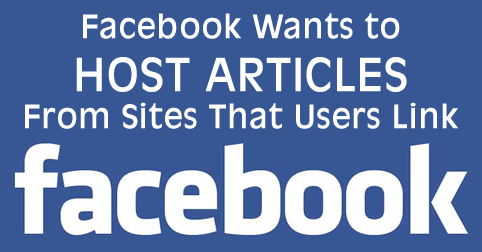 Facebook is in talks with multiple news sites in order to host their content on Facebook, rather than sending the user off to the news site.  But the potential loss to the publisher is huge, while the payoffs to Facebook is arguably significantly higher.   When Facebook hosts the content on their own site, they can run their own advertising on those pages, which not only bumps up their ad views but keeps people on Facebook longer.

But from a website owner’s perspective, the thought of Facebook essentially republishing their content is pretty scary.  They could lose the opportunity to monetize their content, since they can’t run their own ads on Facebook’s version of their content.  And they also lose on further page views, as it is harder to entice readers to click through to other content on their site when Facebook is attempting to insulate those users from the world outside of Facebook.

Right now, Buzzfeed, The New York Times and National Geographic are believed to be close to deals with Facebook.

Since Facebook is currently in talks with news publishers in order to republish the content, smaller sites should be safe from Facebook doing this to all publishers.  However, that could always change, especially if this experiment performs well for Facebook.

One interesting development though is some are thinking that a block of publications would have a better chance to negotiate a lucrative deal from Faceook.

Some news organizations have reacted coolly to the proposal. Several employees of The Guardian, for example, have informally suggested to colleagues at other publications that publishers should band together to negotiate deals that work for the whole industry, and should retain control of their own advertising, whether content is hosted on Facebook or not, a person with knowledge of the discussions said.

However, forming a group to negotiate deals online has backfired for other publishers, as we have seen in some of the recent cases where news sites banded together in order to get money from Google for linking and republished snippets.

We finally have the first Google Quality Rater Guidelines update of 2022, and like usual, it is … END_OF_DOCUMENT_TOKEN_TO_BE_REPLACED