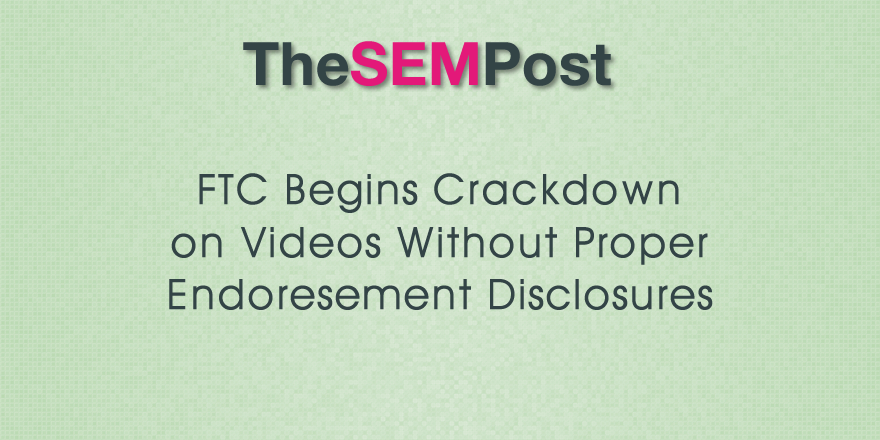 The FTC has begun targeting companies for videos created without proper endorsement disclosures, following their recent crackdowns on fake reviews and tweet promotions without proper disclosure.

The FTC cited Machinama for accepting payment to create videos promoting XBox One and games, without disclosing the fact they had been paid by Starcom MediaVest Group, an agency hired by Microsoft to promote the new console.

What is particularly noteworthy in this case is that the FTC went after videos that were published around the time the new FTC disclosure rules coming into effect in 2013.  When they updated guidelines in regards to product disclosures, this required people and companies to be clear when they were paid or otherwise compensated for posting about another product or company.

But in this case, the FTC targeted videos that were published the same year as the changes and not after more recent videos published within the last six or twleve months.  But this also shows that marketers may want to have a look at their older videos as well, to ensure they don’t run afoul of the guidelines.

It also raises another question – who is responsible for ensuring proper disclosures are made?  When Starcom paid influencers to promote both the XBox One console and video games, they did not request that the influencers disclose where the money came from.

It isn’t clear how the FTC became aware of the issue surrounding Machinima’s lack of disclosure in XBox One videos, nor if the other influencers who were paid were also scrutinized.  Machinima was not fined for the failure to include proper disclosures in videos from 2013.  Both Microsoft and Starcom also received letters, but the FTC found that this issue was “more the exception than the rule for these companies.”

Many could argue that while companies and long time influencers would likely be aware of disclosure rules, would the owner of a small hobby or local blog know that accepting a copy of a book or product and making a video about it would cause FTC issues?  I could definitely see scenarios where companies are fully aware that lack of disclosure is against FTC rules, but hopes the naive bloggers don’t know, since reviews tend to carry more weight when there aren’t any disclosures or caveats given.

The opposite could also be true though, where paid influencers might accept the money but then fail to disclose properly, despite requests from the paying company.  This is definitely an area that could become problematic.

Bottom line, if you are creating videos and are being somehow paid to endorse companies or products in your videos, make sure you are disclosing the fact.

Google has released a new version of the Google quality rater guidelines, a year after the last … END_OF_DOCUMENT_TOKEN_TO_BE_REPLACED