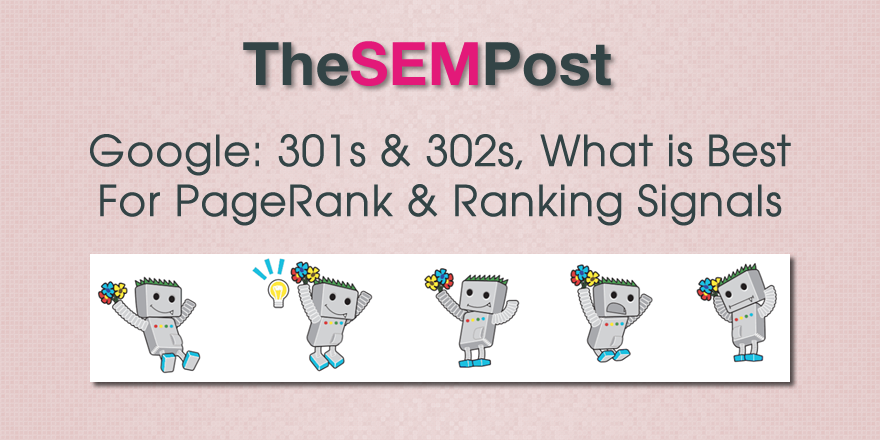 We tested – even back in the day Matt did a video on it – don’t do 301s because they don’t pass PageRank – or they don’t pass the full PageRank.  But in the meantime we have had a few incremental changes to our indexing system where PageRank is calculated and I know that that was fixed.  I wasn’t to say that it doesn’t matter from PageRank point of view – and I am stressing PageRank because when I tweeted that 301s pass the same PageRank, not every signals.301/302 definitely pass all PageRank to the redirect target.  Other signals should follow.

This also confirms that some of those old videos are no longer accurate because Google has changed how their algorithms work since Matt Cutts first began recording those videos many years ago.

If you do a test, and I know there are at least 3 or 4 people in the room that like to do tests – if you do a test and see that basically you redirected  a page to an identical page and its ranking changed, then that’s something we probably want to fix.  But I haven’t seen that happening.  I have seen several site moves that were negatively affected by the move but we – or I believe we fixed those issues and unless whoever implemented the site move screwed it up, there shouldn’t be a ranking change.

I then asked specifically, “So going forward, best practices, 301 versus 302?”

They should pass the same PageRank.

So with Illyes specifically referring to PageRank, how does this impact ranking factors beyond?  So again, I asked wanted to get into specifics, and asked “What about for the other signals?”

I will go with whatever you like.  And another point on that is that if we were looking for always – or respecting always – status codes, the http status codes, we would be in big trouble.  Sites screw them up all the time.  So we have to have wiggle space to make sure we don’t ultimately hurt our users by not showing the right results.  But again, test it and we will try and fix it if we aren’t right.

So it seems that if you see issues where there are differences between 301 and 302 redirects, it could be a bug.

We finally have the first Google Quality Rater Guidelines update of 2022, and like usual, it is … END_OF_DOCUMENT_TOKEN_TO_BE_REPLACED