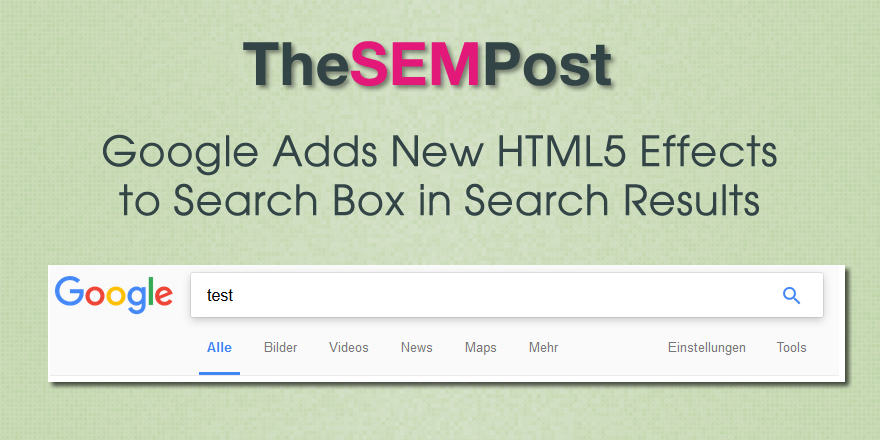 Did you notice Google’s search box is looking a bit different?  Google is changing the way the search box appears in the search results, and the changes seem to be different based on where you are searching from.  And when you mouse over the search box, the effect intensifies.

We have two styles being tested.  But the second version has significant enough changes in both style and formatting that Google could be changing to that style.

First is a subtle change version of the search box.  Here is how it appears, and the second screenshot is how it appears when you mouse over.  This one is active for searchers on Google.com and some of the other country versions of Google.

The second version is the one I prefer.  Not only is the search box emphasis changed, but so is the magnifying glass icon and the area around it.  The second screenshot shows it with the mouseover.  This version appears on Google.de.

This is also different from the type of shading used with the card style layout that some searchers periodically see.

There are a few other changes with the second version, which could be a test that Google is moving to.  They have moved “Tools” to the right hand side, separate from the other search filters such as videos, news and maps.  And they have added “Einstellungen” which means “Settings”.

The Google logo in the second one is also significantly larger, which brings more brand awareness.  And the background color is lighter.

The effects are done with HTML5.  The first version seems to be the default used for most countries.  The microphone will also display for those searching in Chrome too.

Thank you to Frank Sandtmann for sending The SEM Post these screenshots.

Google has released a new version of the Google quality rater guidelines, a year after the last … END_OF_DOCUMENT_TOKEN_TO_BE_REPLACED