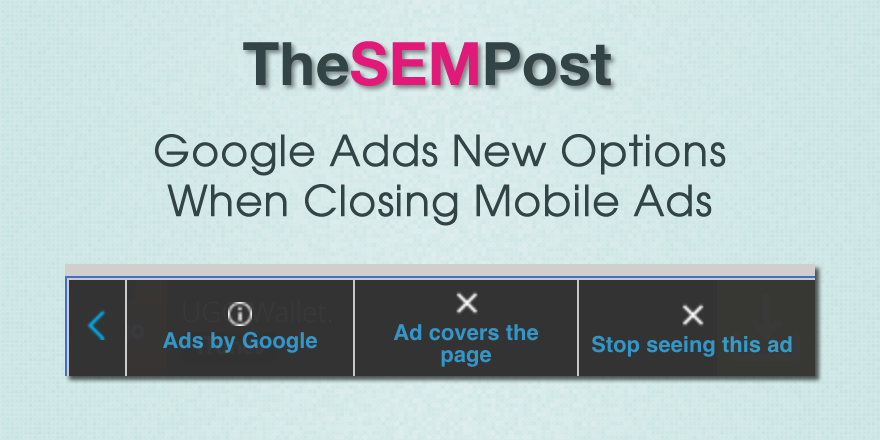 Google announced had they were making changes to mobile ads to reduce the liklihood that people would accidentily “fat finger” an ad while trying to close it.  And now we have seen how they are putting this into action.

Here is an ad how it normally appears, with the X to close.  But after it does it’s initial view of the image ad (where image away from the X location will immediately direct you to the app store without confirmation, it then changes.

Notice it now has a new download icon on the right hand side – well away from the close X, even if it is on the opposite side that you would expect to find a close icon.

If you click the side with the download icon, it expands that icon with a confirmation to state that this will be installed if you click on it.

Then, when you close it, it doesn’t automatically close it but gives a couple options – one to stop seeing this particular ad, and another one that says “Ad covers the page” that allows users to report an ad that could incite accidental clicks… a tactic that some less savory app publishers are known to use.

It is unclear what Google plans to do with the information gained through the “ad covers the page” reporting, but one hopes that they will be using it to weed out the types of applications where accidentally clicking ads is more a design element and a deliberate means to increase ad revenue.

This new option does definitely make it more attractive for users to advertise in mobile apps once again.  Many advertisers were reluctant due to low conversions which many felt was due to accidental clicks, particularly in gaming related apps.

And users themselves hate when they accidentally click on a mobile ad they weren’t intending to, as it often redirects the user from the application or page they are viewing to open up the specific app in the App Store.  This is one of the main reasons many people hate apps that monetize with in-app ads, especially if it is an app that doesn’t offer a paid ad-free version.

It will be interesting to see how if these types of changes bring confidence back to some advertisers to test in-app advertisements once again.

Google has released a brand new version of the Quality Rater Guidelines, the third one this year.  … END_OF_DOCUMENT_TOKEN_TO_BE_REPLACED