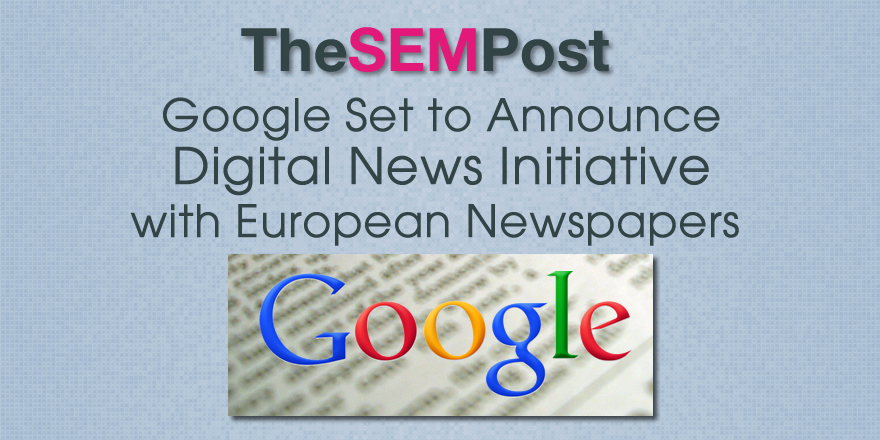 Google is set to announce a new Digital News Initiative with eight European newspapers, including the Guardian and Financial Times.

This new initiative is seen by many as a way for Google to work with publishers who are struggling to translate print publications into a revenue sustaining online model.  This initiative will work on product development, which will assist publishers in increasing revenue, traffic and engagement.  A €150m innovation fund is also being established.

According to the Guardian, Carlo D’Asaro Biondo, head of Google’s strategic relationships in Europe is speaking at the FT Media conference in London and will reportedly say:

“We recognise that technology companies and news organisations are part of the same information ecosystem and we want to play our part in the common fight to find more sustainable models for news.

“We firmly believe Google has always aimed to be friend and partner to the news industry, but we also accept we’ve made some mistakes along the way.

“We are determined to play our part in ongoing dialogue and business partnership with the aim of building something more sustainable.”

The initiative wasn’t created in direct response to the recent EU anti-trust probe, but has been in the planning stage since at least last summer.

In a statement D’Asaro Biondo released to the Guardian, the issue of how quality journalism can be supported in the digital age is a major issue to support.

The internet offers huge opportunities for the creation and dissemination of great journalism. But there are also legitimate questions about how high quality journalism can be sustained in the digital age. Through the Digital News Initiative, Google will work hand in hand with news publishers and journalism organisations to help develop more sustainable models for news. This is just the beginning and we invite others to join us.

Google also plans to add staff to support this role in three cities – London, Paris and Hamburg.  Training partnerships are also expected to be announced, including one with the European Journalism Centre (EJC).

This will definitely be worth watching to see not only how publishers react to this initiative but also to see if it appeases the recent issues in the EU surrounding Google’s dominance in multiple business areas, including Google News.

Update: Google has announced the news on their Google Europe blog.  Here are the three key things that Google will be doing:

First, product development. We will create a publishers’ working group from across Europe to explore product developments aimed at increasing revenue, traffic and audience engagement. Over the years we have worked on a range of news-related initiatives, but we tended to work in isolation, and the feedback has been that Google can be complicated to work with, and at times unpredictable!

Second, we will significantly increase our investment in training and research. Through our newly established News Lab team we will bring dedicated training resources to European newsrooms for the first time. We are creating training programmes with a number of journalism organisations, including the European Journalism Centre, the Global Editors Network and the International News Media Association.

We will also invest in research into the fast changing media landscape. We are partnering with the Reuters Institute in Oxford to create the deepest and most comprehensive picture of how the consumption of news is evolving in Europe. For 2016 the Reuters Institute Digital News Report will be expanded to cover 20 European countries – an essential guide to the changing news landscape.

We will set up a grants programme for academic institutions who wish to carry out research into the growing field of computational journalism. And we will extend our successful Google Journalism Fellowships programme to Europe, aimed at students interested in using technology to tell stories in new and dynamic ways.

And thirdly, we have allocated 150 million euros to stimulating and supporting innovation in digital journalism within the news industry in Europe, over the next three years. In the feedback we hear from publishers and editors, it is clear that there is a great desire to experiment more freely, but risk-taking comes at a cost. The purpose of this is to make grants available to projects which demonstrate new thinking in digital journalism. No-one knows where the next great idea will come from – but we want to stimulate and nurture ideas that come from those who are closest to the action, from those who know best how journalism is changing. Anyone working on innovation in online news in Europe will be able to apply, including national and regional publishers, new players and pure players.

Google has released a new version of the Google quality rater guidelines, a year after the last … END_OF_DOCUMENT_TOKEN_TO_BE_REPLACED