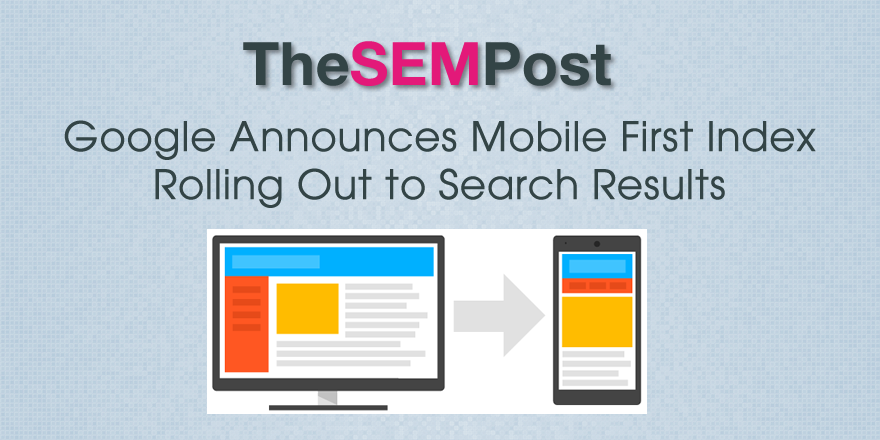 Google has announced they have officially begin to roll out the mobile first index beyond the initial testing phase.  The mobile first index, which has been testing with some sites in their search index, sees Google crawl, index and rank a page based on the mobile version of the page instead of the desktop version.

Google began making the change to mobile first after more than 50% of searchers were done on mobile devices, and with a growing number of sites offering truncated content to mobile users, leaving those searchers frustrated when the page they click through to doesn’t actually contain the content expected.

For those with responsive sites, then you probably don’t need to worry about anything.  But those with sites such as m. sites with different URLs, or those serving different content to mobile users versus desktop users, will have issues.  Google recommends site owners use the identical content, as well as relevant markup, on both the desktop and mobile versions of the page.

They stress that there is no “desktop index” and “mobile first index” but rather they are the same index, simply some sites have the desktop version indexed while others have the mobile version of the site indexed.

The blog post also confirms that Google will be sending out a notice about mobile first indexing via Google Search Console, which John Mueller first revealed last week.

Google is also making it clear that sites that aren’t mobile friendly will continue to rank.

We may show content to users that’s not mobile-friendly or that is slow loading if our many other signals determine it is the most relevant content to show.

If someone is searching for a brand name or a specific store, chances are that searchers want to find that company’s website.  And it wouldn’t be a good user experience for Google to exclude or devalue those searchers because the site is not mobile friendly, when the majority of the searchers still want to go to the site.

They also remind searchers the speed is important, especially for mobile content later this year, when Google begins to take mobile page speed into account in their algos, instead of only the current desktop speed.

Google has also released a best practices for mobile first.  For those following mobile first, there isn’t a lot of new information, although there is some information for edge case setups.

Google has released a brand-new Google quality rater guidelines, coming close to a year after the … END_OF_DOCUMENT_TOKEN_TO_BE_REPLACED