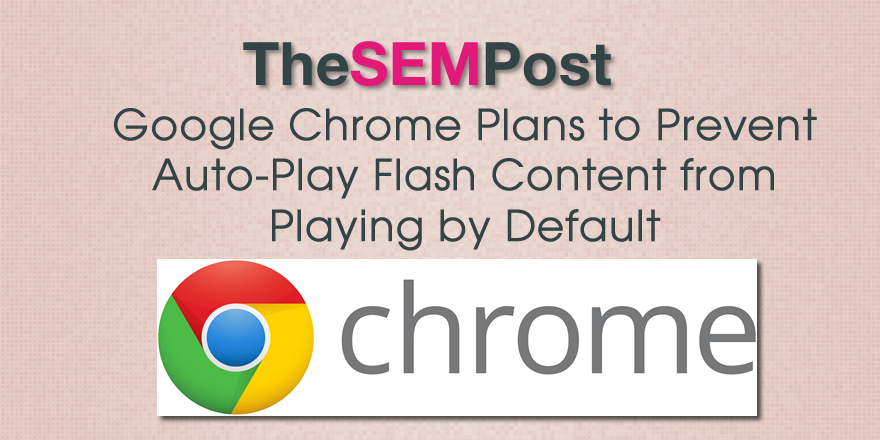 Is your website still rocking Flash content?  You may want to start rethinking that Flash, as Google announced plans to prevent non-essential Flash video content from automatically playing when it loads a webpage.

Chrome is billing it as a way to save battery resources, and says they worked with Adobe, the creators of Flash, to do it.

It is already available on the Chrome beta release, and it will be arriving in the regular Chrome desktop “soon,” according to Google.  To manually enable it, you can find the settings in Chrome’s content settings, then selecting the “detect and run important plugin content” option.

Many users who download programs such as Ad Block Plus do it in order to prevent video ads from automatically playing in the browser.  So not only could this alleviate a major pain point for users, it could also reduce the number of users seeking out programs to block ads, which would be a win for Google’s ad departments.  But the big win is convenience and ease for users who get annoyed by sudden autoplaying Flash video content.

There are several Chrome and Firefox extensions that do something similar, however they do not load Flash content at all, and instead display a gray box that needs to be clicked on in order to activate it.

Bottom line, Flash is quickly going the way of the dinosaurs.  If you are still utilizing Flash content on your site, something that has gotten much less use in the world of smart phones that do not display it, you will want to think about switching it to something that won’t be blocked by the leading industry browser.

Google has released a new version of the Google quality rater guidelines, a year after the last … END_OF_DOCUMENT_TOKEN_TO_BE_REPLACED