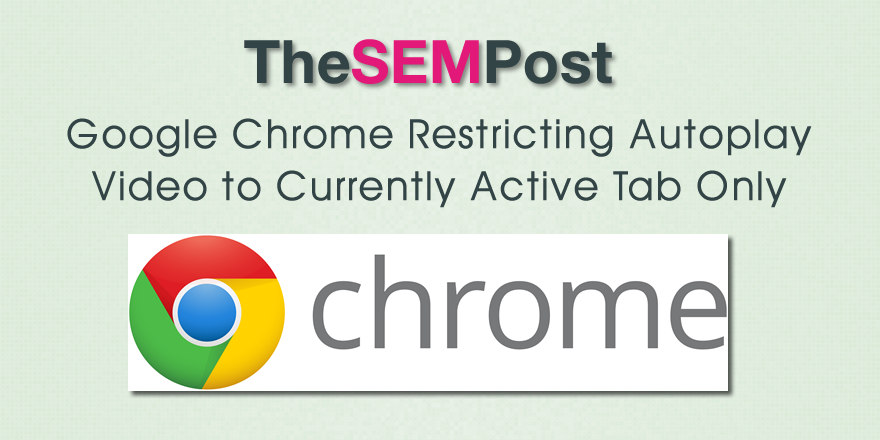 Google Chrome will no longer automatically play video in tabs that are running in the background.  Autoplay videos will now be restricted to the active or current tab only.

For users who love to open multiple tabs, it can sometimes be a game of hide and seek to try and determine which tab has an autoplay video going.  While Chrome will often display a little play icon on the tab that has a video playing, it doesn’t work 100% of the time, and users are still required to switch to that tab in order to stop the autoplay video.

Now, any autoplay videos in non-active tabs will no longer play.  This change, along with the new change that will see Flash content no longer play in Chrome, will make surfing in Chrome a much more pleasant experience.

However, once a user switches tabs to one with an autoplay video on it, it will begin the autoplay immediately.  So it doesn’t completely disable autoplay, but essentially hits the pause button until the background tab is viewed.

Google Chrome will now defer playback of autoplay media until the tab is foregrounded in the latest Dev Channel. This means no more “Where’s that sound coming from?” moments when an ad for instance decides to autoplay in a tab you’ve specifically opened in the background.

Resources will still be preloaded if indicated but Chrome will delay the start of playback until you actually visit the tab.

This cool feature prevents obviously user annoyance but also conserves power as Chrome will only consume power once the tab is foregrounded.

This is also great news for advertisers.  Depending on the network, many advertisers were still playing for these autoplay videos, even if they were never seen in an active tab or by a user at all.  This change should significantly improve brand exposure and ROI  – at least for Chrome users.

It also means that autoplay ad space that is displayed in Chrome has also become that much more valuable, and potentially worth more money than in other browsers, since the likelihood of the ads being seen is greatly increased.

Google has released a new version of the Google quality rater guidelines, a year after the last … END_OF_DOCUMENT_TOKEN_TO_BE_REPLACED