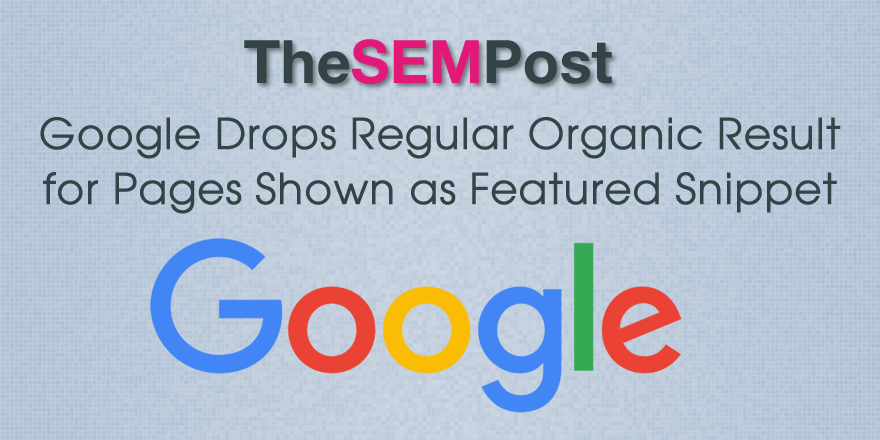 From a user perspective, this does make sense.  It was never clear before why Google would double up and show a page twice in the search results, often with the identical snippet, especially when the page was listed above the fold in a top organic spot too.

There are also other implications with the change.  This does mean it makes it a lot harder for those trying to steal the featured snippet from a competitor, since now you don’t know where exactly in the organic results the page would normally appear.

Google doesn’t seem to have made this change worldwide.  For example, the regular organic result is dropped for featured snippet results in Google.com, Google.ca but not Google.co.uk or Google.com.au.  Or it could be part of a slow roll out.

It does affect both desktop and mobile results.

I have reached out to Google for comment and will update with any new information.

Added: Not everyone seems to be seeing it, although multiple people ran multiple queries Sunday and reported the regular organic result for the featured snippet was gone.  Rechecking this morning, I was only able to get a single browser session via incognito to show the double listings.  So it could be a very large scale test or a roll out, so I changed the wording to reflect that.  Also for new locations: Some in India are seeing the change while others are not.

We finally have the first Google Quality Rater Guidelines update of 2022, and like usual, it is … END_OF_DOCUMENT_TOKEN_TO_BE_REPLACED