You are here: Home / Google / Google: Why Featured Snippets Rankings are Volatile 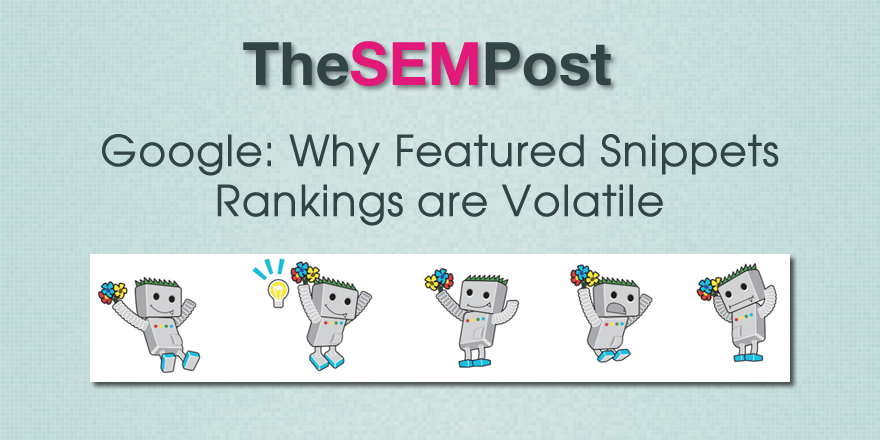 So when it comes to featured snippets, why is there so much volatility in those rankings? At Pubcon, Gary Illyes from Google commented about feature snippets and he revealed some important information about why they fluctuate so much. That is because they are in a constant state of updating the featured snippet algo on Google’s end.

The future of featured snippets is growth and better recall, better precision with devices we just talked about – smart devices – where you only have space, or virtual space, for one answer, one result.  Here featured snippets help enormously the user.

If you do a query on the Google app for example, say ‘why is the sky blue’ you get probably a partial response and it tells you for more, go to whatever site.  I expect we will see more featured snippets, but also more accurate ones in general, higher quality ones that better help our users find the information they are looking for, even on devices where they can’t really type.

I think its good that people think about how to get featured snippets. I don’t think we can recommend for now anything on that topic because the feature is so volatile.  It would be very irresponsible I think from our side to say just drop a few un-ordered list on your page and that’s how you get the featured snippet, because tomorrow it might be an ordered list.

So don’t expect to see anything from Google on how to get those featured snippets, other than create high quality content that answers the question that people are searching for.

We finally have the first Google Quality Rater Guidelines update of 2022, and like usual, it is … END_OF_DOCUMENT_TOKEN_TO_BE_REPLACED