You are here: Home / Google / Google Manual Actions Do Not Last Forever; But Can Be Reapplied 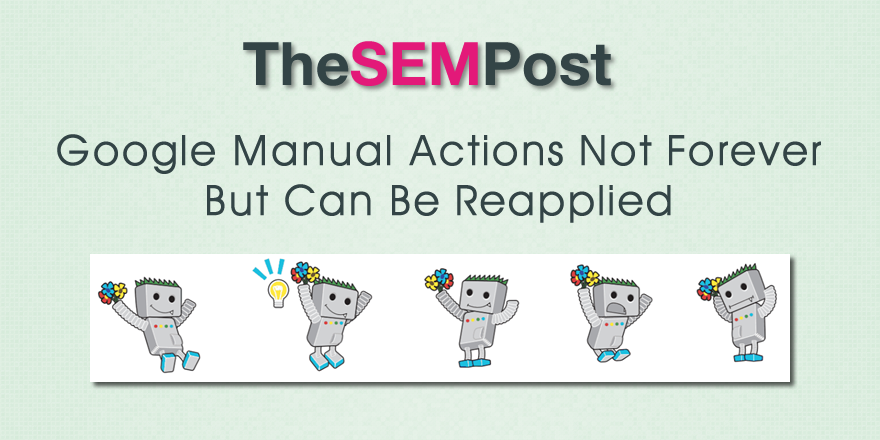 At SMX earlier this month, Juan Felipe Rincón confirmed that “there is no forever button,” when it comes to manual actions being applied to sites.  He also said manual actions can range from days to weeks to longer, but that also takes into account those manual actions that are lifted due to problems being fixed and successful reconsideration requests made.

It isn’t news that manual actions eventually expire, although not all SEOs are aware of the fact. But don’t use an expiry date as a way to get a manual action removed, as it could be quite some time for it to naturally expire.  John Mueller also confirmed this several years ago.

While manual actions will expire at some point, I would strongly not recommend sweeping them under the carpet and hoping that they go away on their own — at least if you’re interested in having your site be optimally represented in our search results. Even when a manual action expires (which might take quite some time), if the reason for the original manual action is still relevant, it’s always possible that the manual action is returned later on.

And for those who want a real trip down memory lane, an old Matt Cutts video stated that yes, they do expire, even for the more malicious related reconsideration requests.

While some people have said they have seen some manual actions not expire for as long as two years, it definitely is worth it to clean up and file a reconsideration request rather than wait for the manual action to expire.

However, if you see a competitor who has popped back up in the search results after a suspected manual action expired, you can always file another spam report on the site to trigger another look at the site, and a possible reapplication of the manual action – something that sounds likely based on Rincón‘s comments at SMX.

Google has released a new version of the Google quality rater guidelines, a year after the last … END_OF_DOCUMENT_TOKEN_TO_BE_REPLACED