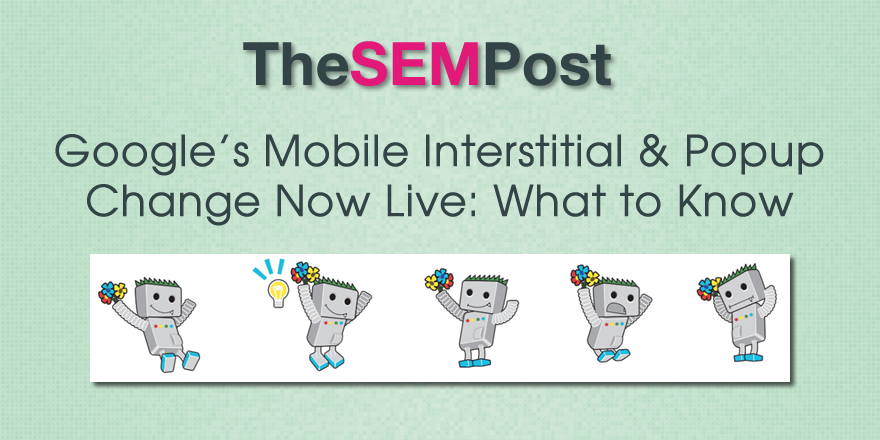 Here are the changes and what you need to now.

Google is only applying this change to mobile searches only.  So you can still use interstitials on desktop without issue unless you have a desktop-only site.  In those cases, because the desktop version is the mobile version, expect those pages to not rank as highly.

Only clicks from Google count

Sites can still use popups and mobile interstitials for the second page view from a Google referral.  Google only looks at the page as a searcher sees it when they arrive from Google for their first pageview.  Likewise, if a searcher arrives from another non-Google traffic source, then site owners are free to show interstitials and popups to that traffic on the first pageview.

Also, don’t forget that when you view to see what your competitors are doing, that you need to check their sites via a Google search referral, as they might also be treating traffic differently depending on whether it is traffic from Google or not.  More than a few SEOs are forgetting that traffic from Google is an important part of the equation when comparing to competitors.

Many sites use fake interstitials where the page view that appears on the screen looks just like an interstitial, but the “real” content is pushed way down the page, so if someone scrolls down enough, they would see it, but it is not readily apparent it is there.  Google specifically refers to fake interstitials are being impacted.

Using a layout where the above-the-fold portion of the page appears similar to a standalone interstitial, but the original content has been inlined underneath the fold.

If you are required by law to get age verification before viewing content on the site, such as for alcohol sites or other content restricted to those above a certain age, Google will not downrank those sites.

If you are utilizing a delayed popup, such as after a user has viewed the page for 10 seconds, or when they scroll to a specific part of the page, that will also be impacted by this change.

Yes, using exit interstitials is fine with the new change, even when it is on a page that came from a Google search referral.  But be sure it is a true exit interstitial not simply something that is delayed, which would be impacted.

If you are hoping the mobile friendly test might show if a site is violating this new mobile interstitial change, you are out of luck.  Google can still show a site is mobile friendly via their test, but it could still be negatively impacted in the search results because of the popup or mobile interstitial.  Google has no plans to create a tool specifically for seeing whether a page is impacted or not.

@virtualesteem no, the interstitial part is separate from the mobile-friendly test.

The change, like the original mobile friendly ranking boost, is applied on a per page basis.  So this means Google will look at each individual page for mobile interstitials and pop-ups and downrank it accordingly.  So if you haven’t made the change yet, it would be best to start with the pages with the most Google traffic.

Google has said that popups small enough won’t trigger the devaluation… but of course, we don’t know what size that is, and because Google no longer uses the mobile friendly tag in the search results, it would be much harder to reverse engineer just how big the popup can be before Google begins to downrank it.

Google has made it clear, this is only one of the many signals.  They specifically state intent of the query is very important, so if the site has other great ranking signals, it can still rank very well despite using a mobile interstitial or popup.

Is it a Penalty?

Technically, this is not a penalty, although many are calling it such.  It is simply devaluing pages that are using popups and interstitials to mobile users.

Yes, Google confirmed that this is live as planned on January 10, 2017.  But John Mueller said it takes a couple of days to propagate across the servers.

Will We See Big Fluctuations?

John Mueller said that many sites that were flagged as being impacted with this change coming into effect did change their use of interstitials, as there was quite a bit of lead time between when Google announced the change and it going live.  So we might not see big fluctuations.

We finally have the first Google Quality Rater Guidelines update of 2022, and like usual, it is … END_OF_DOCUMENT_TOKEN_TO_BE_REPLACED