A new Google News test has popped up for a limited number of search queries that displays a tiny thumbnail for a video result inline with a row of related thumbnail images.  It is similar to how video results had been displayed several years ago, but something Google had moved away from in favor of more thumbnails from news stories instead.  This style has been used regularly on mobile and tablet, in a carousel style, but videos have rarely made an appearance in the images line in desktop for quite some time.

The videos seem to always appear to the left of the images and only seem to be appearing on highly trending or newsworthy articles.  Below is a screenshot of celebrity news gossip that was making the rounds this weekend.  However, searching for other news stories or celebrities that were not very recently trending are not displaying these inline video thumbnails. 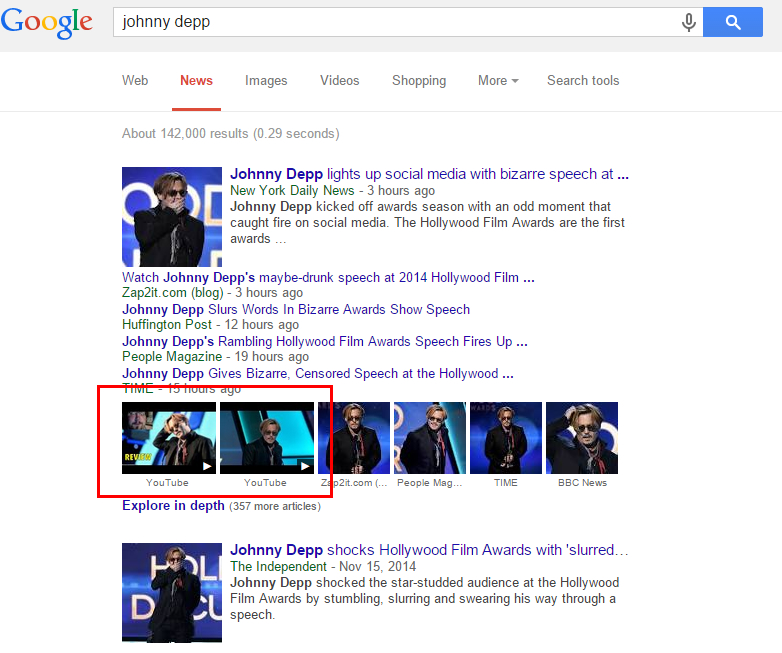 All the video results appear to be on YouTube, however, Google is citing other news sources underneath the video as the source, even though the videos are physically located on YouTube. 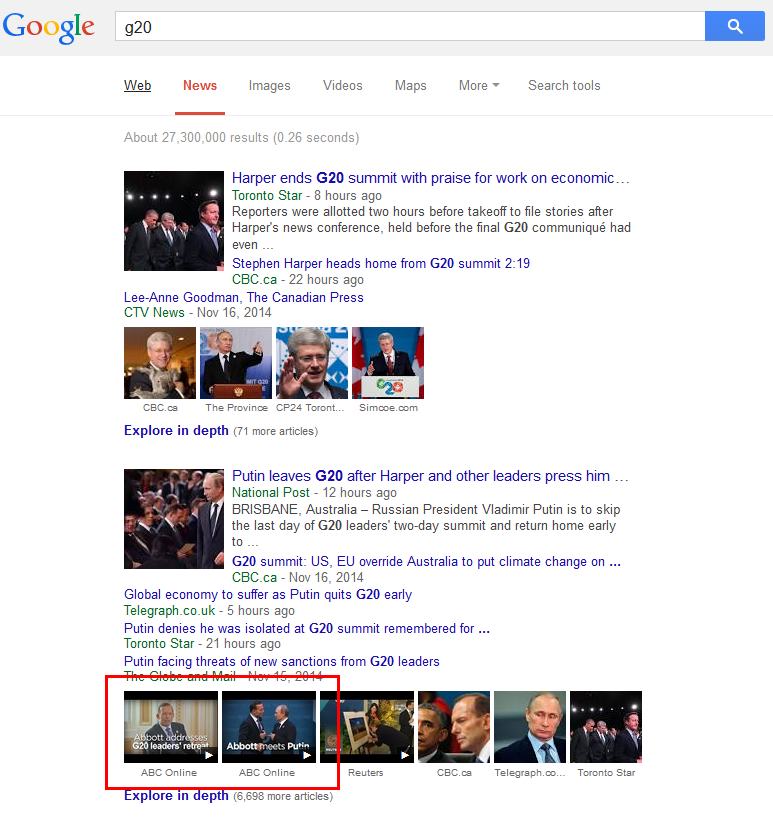 In the above screenshot, the videos are on the official YouTube channel of ABC News in Australia, and they are attributed to “ABC Online”.  The publisher names are not clickable underneath the videos.

There definitely does seem to need some quality control on these videos.  For example, one of the Johnny Depp videos only has 164 views, was uploaded by a random YouTube user with only 4 subscribers, with an extremely poor video in 240p that appears to have been stolen from the Mail Online website.

The other Johnny Depp video ended up being a 8 minute long video of someone with the camera about 3″ away from his face rambling his thoughts… and considering it has an overwhelming thumbs down rating (686 thumbs down to 82 thumbs up), it is surprising Google included this choice.   What is most interesting about this second clip, is even though the video thumbnail shows a photo of Johnny Depp, the entire video is just a closeup of someone reclined in a chair.  This video somehow got 88k views, even though he only has 25 subscribers, but judging from the comments, plenty of those views were from people looking for the actual video but got this guy instead.

Fortunately, the videos for G20 were completely fine and were perfectly targeted.  So it could definitely use some kind of algo where it gives news sites, highly viewed videos or verified YouTube channels a boost.    In the Johnny Depp case, CBS posted a video of the incident on their verified account but it wasn’t used – and it has almost 4 million views.   Neither of the Johnny Depp videos they included should have been used.

From a UI perspective, however, this new look where the videos are inline with the images is definitely more mobile/tablet friendly and is great for user experience.  It definitely cleans up the look of Google News with these new smaller video and image thumbnails, and also enables Google to include more results.  But it is also interesting that they are moving back to a design element they used several years ago, even though they are only utilizing it on the top trending news stories.

Google has released a new version of the Google quality rater guidelines, a year after the last … END_OF_DOCUMENT_TOKEN_TO_BE_REPLACED