You are here: Home / Google / Google: No Fred Algo Update From Google POV 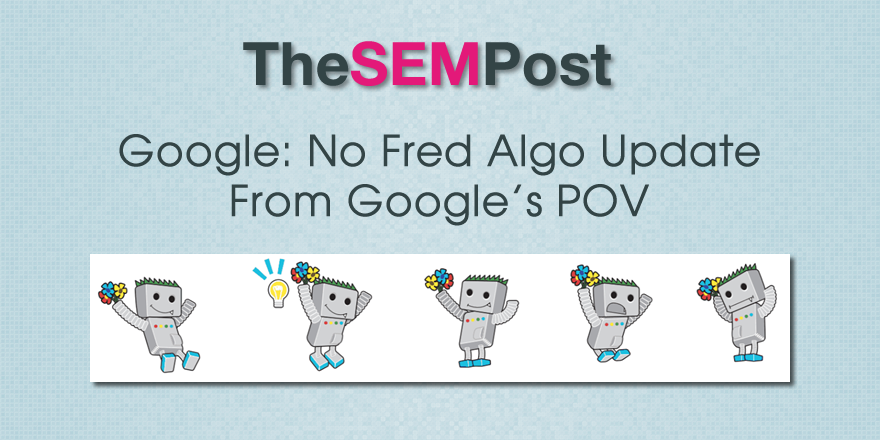 During the last Google Webmaster Office Hours, the Fred algo update was brought up, specifically with regards to the Fred update and ecommerce sites.  And Mueller confirmed that Fred isn’t just a single algo update, but rather just a series of updates to improve the search results.  And he also confirms that from Google’s point of view, there is no Fred algo update.

So from our point of view there was no Fred update.  This is a name that was given externally to a bunch of updates we’ve been doing over time.  So it’s not the case where there’s this one thing that is changing in search, we make changes in search all the time and we are always working on rying to find ways to bring more relevant, more high quality content to users, and that can be affecting a variety of websites, a variety of areas where we show content in search.

So it’s not specific to anything ecommerce related where we’d say if this is an ecommerce website then we will show it lower in search just because it’s an ecommerce website. I don’t think that kind of connection would make sense.  We try to do this on the basis of what we think is relevant and useful to users.

Mueller then gives advice for anyone that is seeing fluctuations in their website rankings and want to improve it, most of which is doing what most already know – improving quality.  This is also why many of the Fred algo updates seemed to revolve around quality issues, although a wide variety of them.

So if your website is seeing strong fluctuations in regards to any general search changes, then I would recommend taking a step back and thinking about what you can do to significantly increase the quality of the website overall.  That is not a simple thing for most parts, that’s really something that sometimes takes a bit of work to really kind of take a step back from the thing you’ve been focusing on for so long to really get objective feedback from others as well and think about what you could be doing to not just tweak things a little but really take it to the next level.

So confirms again that Google Fred wasn’t an update – or series of updates  – that were all revolving around the same single algo that was being tweaked.  But rather, that it was just a series of more random changes made by Google that happened within a short space earlier this year.

Google has released a brand-new Google quality rater guidelines, coming close to a year after the … END_OF_DOCUMENT_TOKEN_TO_BE_REPLACED