You are here: Home / Google / Google Does Trillions of Searches Per Year; Over 50% Mobile Searches 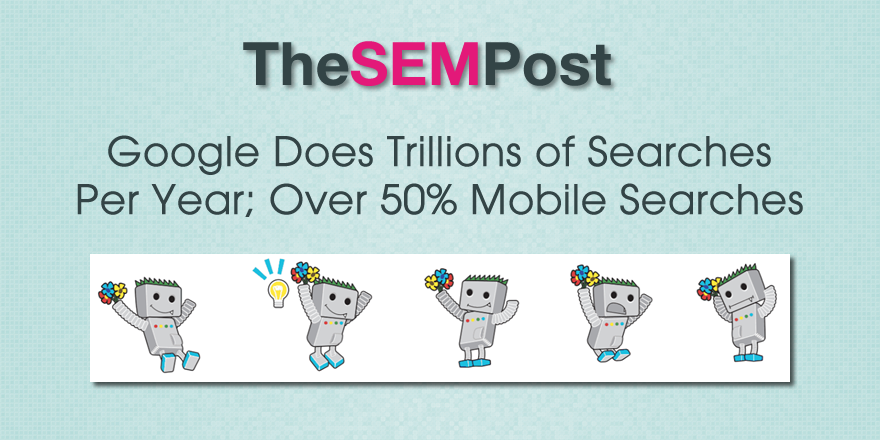 Google has announced some new search numbers, and the new numbers are a pretty big jump.  Google now does trillions of searches per year.

Every year, there are trillions of searches on Google.com and over half of those searches happen on mobile. And across the millions of websites using Google Analytics today, we’re seeing more than half of all web traffic now coming from smartphones and tablets.

I did ask for clarification on Google.com and whether it would also include searches done on the country Google sites, such as Google.ca, Google.fr, Google.co.uk etc.  And Google confirmed with me that this is a global stat.  So the reference to Google.com seems to rather be addressing that these stats don’t include “Google powered search” properties, such as Yahoo etc.

This is a huge update from their last public statement on searches from back in 2012 when they did 100 billion searches per month.  For those struggling with the math, 100 billion = 0.1 trillion, or 1000 billion in a trillion.

As for the 50% mobile, previously Google said just over a year ago that there were ten countries had more than 50% mobile, but late last year they quietly confirmed they are seeing 50% mobile worldwide.  But when you factor in that there are trillions of mobile searches, it definitely puts things into perspective of exactly how important mobile is to Google.

Google has released a new version of the Google quality rater guidelines, a year after the last … END_OF_DOCUMENT_TOKEN_TO_BE_REPLACED