You are here: Home / Apple / Google Paid Apple $1B Plus Ad Revenue for Default iOS Search 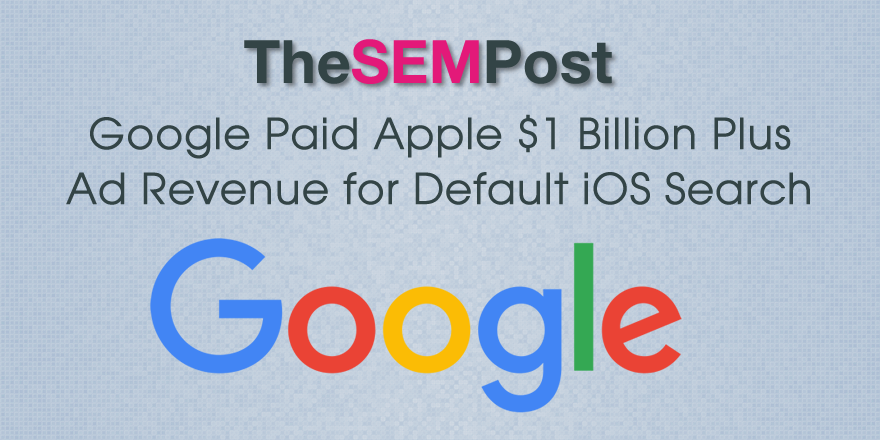 It has long been known that Google paid Apple in order to remain the default search for iOS, but how much was always a question mark.  But thanks to a legal case between Oracle and Google, we now know just how much.

Bloomberg reports that in 2014, Google paid Apple $1 billion dollars for the default iOS search spot.  And on top of this, they also pay Apple a revenue share of all the ads clicked from the Google search results – the figure is said to be 34%, although it is not clear in whose favor that is.

What is most notable, is both Apple and Google, filing separately, sought to have the figures removed from the court documentation.

The magistrate judge presiding over the hearing later refused Google’s request to block the sensitive information in the transcript from public review. Google then asked Alsup to seal and redact the transcript, saying the disclosure could severely affect its ability to negotiate similar agreements with other companies. Apple joined Google’s request in a separate filing.

It appears to have succeeded as the transcript was later removed, but not before journalists discovered it.

The transcript vanished without a trace from electronic court records at about 3 p.m. Pacific standard time with no indication that the court ruled on Google’s request to seal it.

Now that the compensation is known, it raises the question of what other search engine would be willing to spend that kind of money to become the default search engine.  And more importantly, who could match the revenue Apple would be earning from those ad clicks too.  And odds are, none would be able to match it.

It also shows why Apple was more willing to make the default search deal with Google, despite many questioning the reasons behind it over the competition between the two companies, both in terms of devices and apps.  It also isn’t clear how long this default search deal remains in effect for.

Google has released a new version of the Google quality rater guidelines, a year after the last … END_OF_DOCUMENT_TOKEN_TO_BE_REPLACED