You are here: Home / Google / Google Panda Rolling Out in Pushed Increments, Not Constant 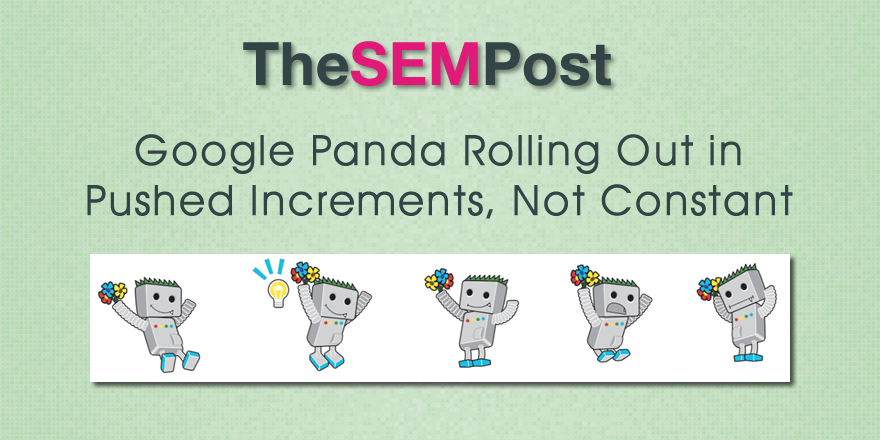 While we know that Google has been rolling out Panda 4.2 very, very slowly, the roll out is actually happening in pushed increments and isn’t a constant on-going rollout.

Glenn Gabe asked Gary Illyes & John Mueller on Twitter whether Panda was being manually pushed out in increments versus a single push that has been rolling out ever since. Illyes responded and said that yes, it is manually being pushed out incrementally.

@methode @JohnMu I think I remember someone explaining that Panda 4.2 is rolling out slowly, but it's manually being pushed (at intervals).

@methode @JohnMu Is that correct? That's versus being pushed once on 7/18 and then rolling out automatically over time. Thx for your help.

This actually makes a lot of sense, based on what we have been seeing with what seems like no action for a while then a bit of fluctuation all at once…. but so slowly that it is very hard to see these changes pushed out if you look at algo weather metrics such as Mozcast to see it.

Marie Haynes, from Marie Haynes Consulting, was happy to see the type of rollout confirmation.  “I was encouraged when I saw Gary’s tweet confirming Glenn’s query regarding Panda running in intervals during this rollout,” she said. “While I have seen several sites that have been hit by the July 18 refresh, the cases of recoveries, or even improvements have been few and far between.”
It is also encouraging for those who have been anxiously awaiting to see Panda changes to their own sites.  “Knowing that Panda is being pushed out in intervals makes me have hope for so many sites that are awaiting recovery,” says Haynes. “I am fully expecting that one day soon we will all suddenly be tweeting about seeing great improvements on sites for which we have made quality improvements.”

Update: Apparently there was some misunderstanding regarding the question and answer.  Illyes is now confirming that “push button manually, rolls out automatically for months. ‘yes’ was for that.”  And he further clarifies that “once we start the rollout manually, we don’t touch it.”

Google has released a brand new version of the Quality Rater Guidelines, the third one this year.  … END_OF_DOCUMENT_TOKEN_TO_BE_REPLACED