You are here: Home / Google / Google Panda Update: Everything We Know About Panda 4.2 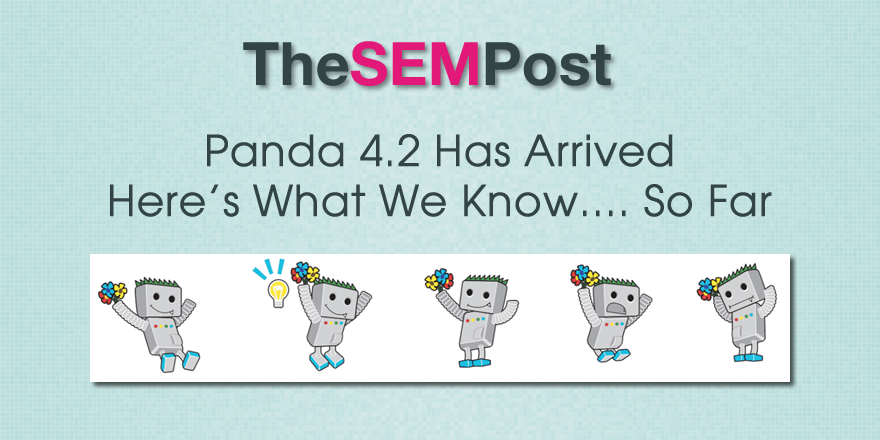 Yes, we have liftoff! Panda 4.2 has finally arrived, following Gary Illyes announcement last month that the refresh was coming.

“This past weekend we began a Panda update that will rollout over the coming months,” said a Google spokesperson about Panda. “As you know, we’re always working to improve Google so search results are higher quality and more relevant for everyone and this is just one way we do that.”

They also confirmed the percent of queries that are impacted by Panda this time around.

Technically a refresh and not an update

For those who like to dig into all the nuances of Panda, this update is technically a refresh and not an update.  This means it is reapplying the identical signals from the previous Panda for this update as well.

Too late for new changes

Unfortunately, once Google begins rolling out one of these updates, it is too late to apply changes that will have any effect during the rolling out phase period.  As we have seen previously, these updates have a cut-off date and any changes made after this date will be applied to the next refresh or update.

That said, it is always a good idea to be continually updating content.  But if you have been previously impacted by Panda and did not make the changes to increase quality yet, you will need to wait for the next one.

Likewise, if you are now negatively impacted by the Panda algo this time around, you will need to wait for the next update or refresh.

What exactly does “coming months” mean?  Does it mean two months?  Six months?  Or is it in limbo right now depending on how fast (or not) they decide to roll it out on any given day or week?

That said, long roll outs are nothing new to Google, and we have seen it in the past.  No one should really be surprised that they aren’t hitting the entire refresh out at once, even though there are some pretty vocal about the long length of the rollout.

Hopefully, this is something we will get further clarification on, or at least an announcement of some variety when it has finished rolling out in the “coming months.”

Who will this affect?

While this update seems to be rolling out much slower than we usually see, with the last refresh Pierre Far from Google said that many high quality small and medium sites were ranking higher.

But the slower update will also make it harder to assess the usual “winners and losers” like we can normally do.

One thing that most SEOs can agree on is that no one can really see the evidence of this refresh going live last weekend.  In fact, the fluctuation Mozcast does show happened before the refresh began rolling out, and the temperatures are positively sunny since the roll out started.

Here is how Mozcast data has looked the last few days. 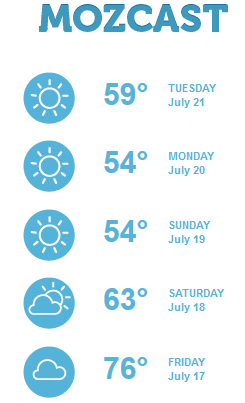 While Mozcast data tracks US data, there is the possibility it rolled out internationally first, but international SEOs are not reporting seeing changes either.

Dr. Pete Meyers, the wizard behind Mozcast, says that he doesn’t see evidence of Panda at this point, but will be rechecking data today.  “As of now, I have no clear evidence of a Panda update,” Meyers says. “Past Panda refreshes have varied wildly in impact.”

Glenn Gabe from G-Squared Interactive is also not seeing any changes, despite access to a large number of sites across numerous verticals and countries.

Overall, I have not seen a lot of movement across sites previously impacted by Panda (or sites that are susceptible to Panda attacks). And I have access to a boatload of Panda data across sites, categories, and countries.

They include large-scale directories, ecommerce retailers, news publishers, affiliate websites, high-volume blogs, press release websites, and more. And overall, there has been very little movement since last weekend. Needless to say, this is a very strange Panda update.

Looking at a multitude of sites that I track across more than a dozen countries, I see nothing whatsoever that would indicate that any type of Panda refresh has taken place so far.

Based on what Google has said about it slowly impacting sites leads me to think that we are unlikely to see the dramatic drops in traffic that we have typically seen during past iterations of Panda and that traffic gains or losses are going to be far more gradual and subtle.

Kristine Schachinger also saw no changes this weekend in any of her clients as well.

We know that Google has run tests on algo changes previously, whether unleashing for a couple of hours, rolling it out on a small set of datacenters or running it on a country specific version of Google to test it before rolling it back.  And there is speculation that recent fluctuations that were previously attributed to Quality/Phantom might have actually been a dry run for the Panda release.

Gabe recently noticed some slight tremors that he initially thought was Quality/Phantom, but which in hindsight could be Panda related.

Last week I wrote a post about another Phantom tremor I saw (which rolled out on 7/14). I saw substantial movement across sites that were previously impacted by Phantom 2 starting on 4/29/15. And of course, a number of those sites have had Panda issues in the past. I’m now wondering if what I saw was actually Panda being tested in the wild. I posted a number of screenshots in my blog post of the impact.

Here is a screenshot from one client showing the “tremor” and initial Panda rollout.

Marie Haynes, of the newly rebranded Marie Haynes Consulting is wondering whether this is the start of a fluctuation of “tremors” as opposed to a spike.

So far I haven’t seen any evidence of any Panda related wins or losses in the sites that I monitor. A slow rollout could mean that interpreting traffic patterns may be difficult. If a site starts to lose traffic three weeks from now, is that a Panda hit?

Hopefully the SEO community as a whole will be able to recognize particular days where many sites saw Panda related changes so that we can note certain days as ‘Panda tremors’. This is what happened when Penguin 3.0 had its slow rollout. It hit on October 17 and then we saw definite tremors on several days after that in November and December.

With that said, Google is working towards making Panda run continuously in the algorithm, so interpreting an algorithmic hit or recovery is going to get more and more difficult.

Will Panda roll into the core algo?

Will Panda ever roll into the core algo for a continuous update?  When we first saw the Quality update, I thought of it as a reverse Panda, since it was rewarding great quality while Panda penalized low quality.

And Google could be working on tweaking the core algo so that their positive signals will keep surfacing the great content so that lower quality content – even if not actually penalized – will rank much lower and pages deep, so long as there is better quality to rank higher.

Google could very well be incorporating pieces of Panda into its core ranking algorithm. And that would actually line up with an “extended rollout” of Panda 4.2. I believe that gives Google room for error as there’s not a hard date tied to the update. They can push updates, tweak the algo, and re-roll it out (in case the results are suboptimal.) That’s speculation, but it’s entirely possible.

And rolling Panda into the core algo would also mean there wouldn’t be the long delays we currently see.

This delay is a significant concern for Schachinger.

Algorithms were supposed to help stop spam, not destroy businesses. Many of the sites affected are waiting 9-13 months between updates for a chance at recovery simply because they were clueless they were doing anything wrong.

As for why we do see these delays, Gary Illyes from Google gave us more details at SMX Advanced about why this is.

Illyes revealed that in order to update or refresh, they need to gather data from it.  He said sometimes the data won’t work because there is noise or problems with the data, so then they have to wait another month for more data.

Many people look to Mozcast first to either see if anything has rolled out, or to confirm what they are seeing in their own analytics reporting.  This is how many have spotted many of the recent updates that Google did not initially confirm, such as the Quality Update earlier this year.

It does raise an interesting question if the traditional serp weather reports are unable to pick up on the changes.  Google could easily change from a push Panda update to a slow rolling one, and webmasters wouldn’t necessarily be aware unless they saw an uptick or decline in one of their sites.  And that date might not correspond with other similar reports that could technically be months apart but stemming from the same initial push.

Bottom line, the long awaited Panda refresh is here, even though you might not be able to actually tell it arrived.   Hopefully as the slow roll out continues, we might be able to see some patterns… but not the other hand, we might not.

Google has released a new version of the Google quality rater guidelines, a year after the last … END_OF_DOCUMENT_TOKEN_TO_BE_REPLACED