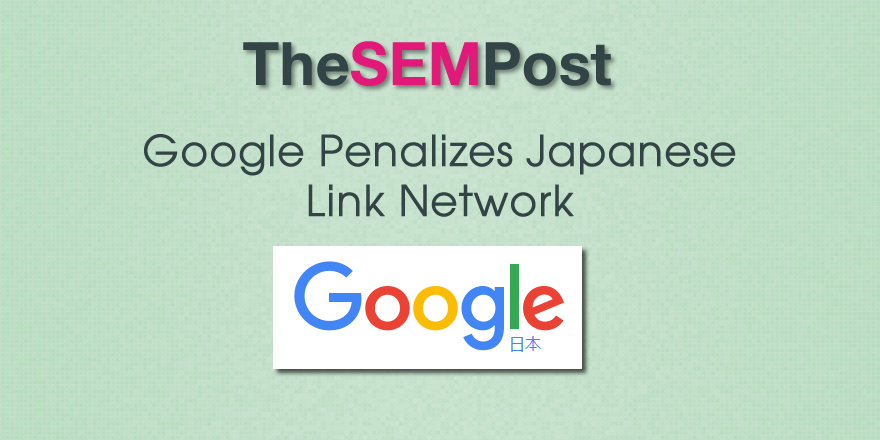 On the Japanese Webmaster blog today, Google announced that they have penalized a Japanese link network for violating webmaster guidelines.

They haven’t detailed which link network was penalized but I expect that information will be publicly available soon after penalized SEOs start talking about being hit with manual actions from this link network removal.

And the (very) rough Google translation:

As part of this effort, Google this time, in order to operate illegally search result link program has undergone a countermeasure against some of the site network of the Japanese had done the buying and selling of participating in the link. Among this is because it was also included sites that repeatedly Webmaster Guidelines violation, was subjected to severe measures than normal in some cases.

Google is penalizing more severely than usual because of repeated violations of Google’s webmaster guidelines.

The blog post also seems to imply that links were created for client sites by SEO firms and ad agencies, and that some of the links were run as “advertisements” that were clearly for link value, as they include a link to their previous post from 2013 about SEO firms that repeatedly violate the webmaster guidelines.

And the rough translation via Google translate:

In addition, we tell even before, there seems to be the case that measures would be carried out, such as violation of the Webmaster Guidelines in place without the knowledge of the webmaster. Previously it introduced the example of SEO firms , but it seems there is also be generated by the outsourcing of such advertising not only SEO skilled in the art. In order to prevent this, the web master you we recommend that you check from time to time and see whether subcontractors are doing what measures.

This isn’t the first time Google has publicly announced they have killed link networks and they tend to do it when major link networks that impact a huge number of sites is taken down.  They previously announced removal on link networks in Poland in two separate removals, and Germany (along with one that was all of Europe),

If your site might be impacted by the Japanese link network being penalized, check in Google Webmaster Console for a link related manual action.  But if you don’t see one immediately, you might not be in the clear as it can take a few days to show up.  So it would probably be worth getting a disavow file ready to remove the low quality links and start sending out removal requests, especially if you do notice a drop in rankings and/or traffic.

I don’t expect Google to announce this on the other webmaster blogs, as when they take down a link network that seems to be specific to one country, they only post on that country’s webmaster blog.

And to avoid rampant speculation, this is nothing to do with Penguin, this is just a regular link network removal that Google does periodically.

Kenichi Suzuki, a Google Top Contributor and well known Japanese SEO, also provided us with a short translation of the blog post.

Google Japan penalized several Japanese link networks. Some of them got severer penalty because they had violated the guidelines repeatedly.

There are webmasters that violate the guidelines without noticing their SEO is not legitimate. Violations are made by not only SEO companies but also ad agencies. Google recommends webmasters to check regularly what their agencies are doing.

We finally have the first Google Quality Rater Guidelines update of 2022, and like usual, it is … END_OF_DOCUMENT_TOKEN_TO_BE_REPLACED