You are here: Home / Google / Google Penguin Weeks Away, Will Be Part of Core Algo 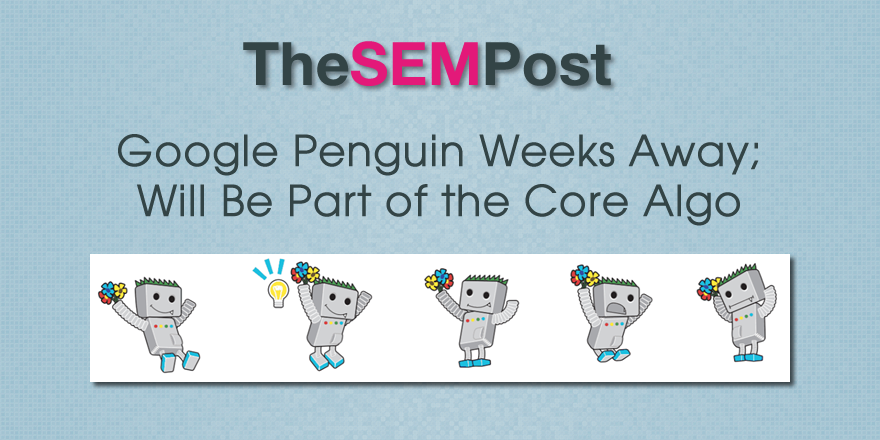 We have another new Google Penguin status update (and no, it isn’t rolling out now).  Gary Illyes responded to a question on Twitter where he was asked about the timeline for the real time Penguin being launched.

Illyes responded it is weeks away, which is much better than the other option of months away.  He did say that Google is aiming for a Penguin launch this quarter.  But as usual, he wasn’t more precise.

@mrjamiedodd I'll go with weeks. We're aiming for launching penguin this quarter, but we don't have a more precise timeframe.

It is hard to get upset with Google not revealing more about the dates.  As we have seen previously, SEOs tend to get very upset if Illyes (or any other Googler) reveal a date and they don’t hit it. In fact, SEOs often start rallying the pitchforks the day after an estimate is missed.

@mihaiaperghis yes, which also means we'll stop talking about it (or I will anyway) @rustybrick

To be fair, I am pretty sure Googlers are tired of answering “Is it Penguin?” questions multiple times a day.

So the wait looks to be weeks away, with an aim for this quarter (which means the end of March).

On the positive sign, you still have time to work on those disavow files and removal requests before the real time Penguin launches.

We finally have the first Google Quality Rater Guidelines update of 2022, and like usual, it is … END_OF_DOCUMENT_TOKEN_TO_BE_REPLACED