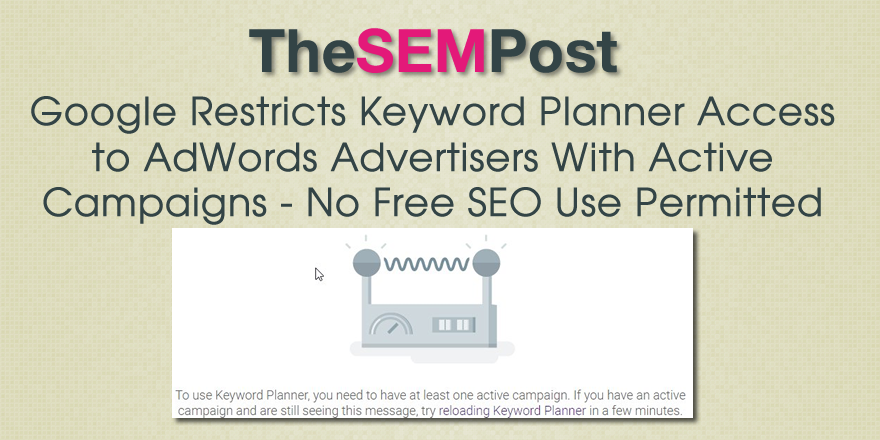 Do you use Google’s Keyword Planner for keyword research for SEO?  Unless you are running an active AdWords campaign, you will no longer have access to use Google’s keyword tool at all.

Over the weekend, I began hearing reports that Google has turned off access to those that use the tool without also being an active advertiser with a currently active campaign.  Now, AdWords is showing the following message for those without an active campaign running:

This change is huge.  Both SEOs and advertisers alike have used this tool – and the earlier versions of it – for years.  So turning off access is a stunning move.  If usage was an issue, they could have limited it to X queries per day.

It also has another impact.  If brand new advertisers are unable to see how many people are searching for their keywords and without access to pricing estimates, why would they actually start a campaign?  Being able to look at keywords is a critical part for anyone thinking about advertising on AdWords.

With this change, non-advertisers would need to either create an active campaign solely for the purpose of accessing this tool or use a third party tool.  But it is unclear if any of those tools are also impacted by Google’s change.

But it is clear that this is targeting SEOs – those who use the Keyword Planner without Google getting any financial benefit from it.

It is also worth noting that Google keeps the AdWords team and the Search team far apart.  So while this change impacts SEOs, it is likely no one on the organic side of things was aware of this change, since the Keyword Planner is an AdWords product.

Will Google revert this change?  Hard to say, but I can’t imagine they made this change lightly.  But it could actually cause some SEOs to create AdWords campaigns for access to the tool, which would be seen as a win for AdWords.  But even though this is an AdWords tool, this change will definitely hurt SEOs using it for keyword research.

Added: Some people are still able to access it without an active account at the moment.  But many are reporting they can no longer access it.

Google has also confirmed the active campaign restriction as well.  From a post by CassieH, AdWords Community Manager on June 24th:

Thanks for posting to the Community. The Keyword Planner Tool requires an active campaign in your account, so you will need to go through the billing set-up in order to access it. You can find more information about this in this thread: https://www.en.advertisercommunity.com/t5/Basics-for-New-Advertisers/Can-t-access-keyword-planner/td…

However, there is currently a known issue with the Keyword Planner. If after you set up your billing information and first campaign and still cannot access it, please let me know here and I will be able to give you an update.

According to this post, it seems that it is restricted to newer accounts, so those with legacy accounts seem to still have access.

Unless the rules have changed, it seems you need to enter your billing information with a billing method (ie. credit card number), then you can launch your campaign but immediately pause it.  Then you can access the tool.

You DO need an AdWords account though – and to do that, you normally need to enter billing information.

@marktraphagen @rustybrick @pedrodias @jenstar Hey Mark – yes, you still need an account (even if it's inactive) to use the planner. -Ian

@recalibrate @jenstar @rustybrick @pedrodias Hey all – we're still working on this issue and will provide any updates we receive ASAP. (1)

@recalibrate @jenstar @rustybrick @pedrodias To clarify, you do not need an active campaign to use the Keyword Planner. (2)

Google has released a new version of the Google quality rater guidelines, a year after the last … END_OF_DOCUMENT_TOKEN_TO_BE_REPLACED