You are here: Home / Google / Google Search Algos Are Same Worldwide, Not Country or Language Specific 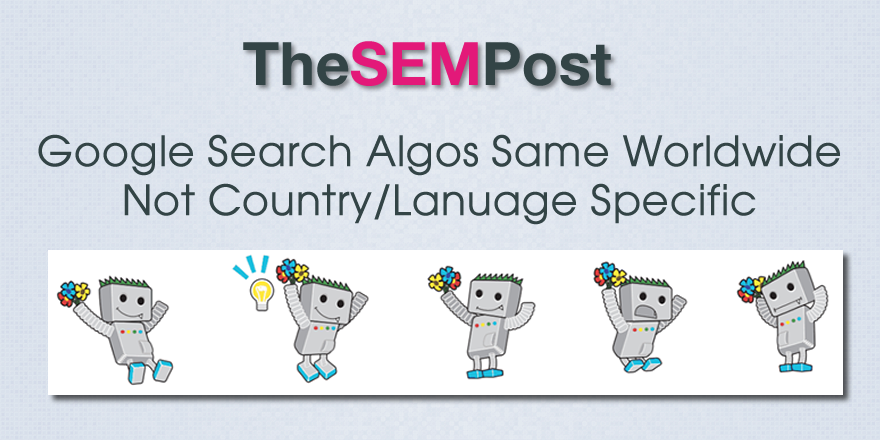 The question came up in yesterday’s hangout about whether Google’s search algos, including Panda and Penguin, were applied differently depending on the location or language.  John Mueller from Google responded that they are the same, but detailed the things that can be influenced by the country and/or language.

For the most part, our search quality algorithms are essentially the same for all countries and languages.  There are very few parts of our algorithms that are different or that are specific to individual languages usually, or countries.  Sometimes the countries aspect plays more of a role in regards to which search features actually show.  So whether or not we have a featured snippet show or not, that might depend on your country.

So those aspects can play a role there with regards to most of our algorithms, we do try to make them as generic as possible, because if we have one algorithm that works really well across the board, then we don’t have to worry about fine tuning it and testing it in all these different languages or countries.  We can kind of assume it will continue working across the board, we can update update one version to make sure those improvements are available to everyone worldwide.

Google has said this periodically over the years.  But sometimes what you can see are changes that might be tested on a particular country version of Google.  For example, a few years ago Google.ca kept showing changes and tests that didn’t show up in Google.com and other country-specific versions of Google.  This is why SEOs often try running identical searches in various country versions of Google, to compare the differences.

We also sometimes see features roll out to specific countries first, often the US, like the medical knowledge panels when they originally launched.  But those are outside the scope of the regular organic search results, and is in line with what Mueller was saying about how sometimes features in the search results are influenced by location.

Gary Illyes from Google commented last year that there is sometimes a country and a language boost.  This is obvious to searchers, and why if you search from Canada the results have more Canadian specific results, while the same search in the UK will show more UK heavy results.

H/T Glenn Gabe for giving quick access to the exact part of the video, so I didn’t have to hunt it down.

We finally have the first Google Quality Rater Guidelines update of 2022, and like usual, it is … END_OF_DOCUMENT_TOKEN_TO_BE_REPLACED