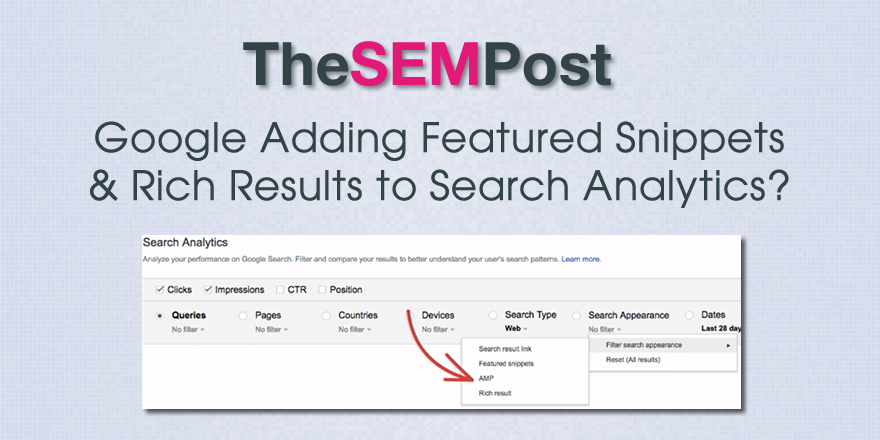 During Google I/O last week, Richard Gingras talked about the new AMP reporting in Google Search Console that launched last week.  But interestingly, the screenshot he used showed off something extra… reporting for both featured snippets and rich cards.

Here is the screenshot he used.  The arrow shows AMP but the other options are “Search result link” (which would likely be the default setting), “Featured Snippets” and “Rich Results.”  It is located under the “Search Appearance”, the new section that shows up in Search Analytics for those users who are currently using AMP – those sites without AMP do not see this option in Search Console yet.

Now, since this hasn’t been released, things could change and it might change from the screenshot Gingras used or it could merely be testing to see if it is possible. But webmasters should be pretty excited that it has gone from a “something the team is working on” to something that is far enough along to be shown off in a screenshot.

Google has said multiple times that they were looking to expand featured snippets reporting, to give site owners a bit more data on when their featured snippets were being displayed and how often a user clicked through from one.  And it is unclear what “rich result” might mean exactly.

Google has released a brand-new Google quality rater guidelines, coming close to a year after the … END_OF_DOCUMENT_TOKEN_TO_BE_REPLACED