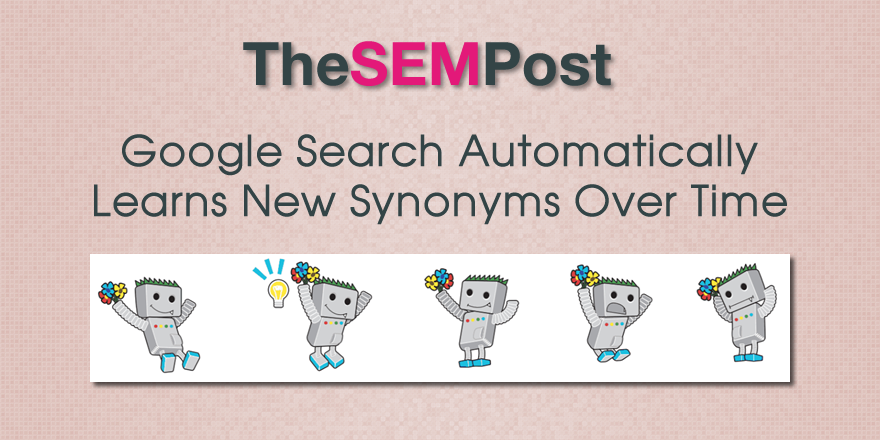 In the last Google Webmaster Office Hours, the topic of synonyms in Google Search was discussed, specifically around how Google recognizes synonyms, and when there is a new word introduced, how Google learns to connect it.

First, he says that Google learns synonyms automatically.  There isn’t a generated database of synonyms that Google obtains and uses it for the search results.

In general, we do try to recognize when things are synonyms, which we try to do automatically.  So it’s not that someone is writing all of the words that they know in these languages and saying this matches this one and this matches that one.  It is more a matter of our systems learning this over time.

Next, he comments about when new synonyms are introduced, and how Google learns that they are synonyms, even when the word is technically brand new, or brand new to the topic.

That’s something that sometimes you notice when a new word comes into the vocabulary where it becomes really popular and everyone uses that word for the specific topic.  Then you see in the beginning it is treated as something completely separate and then over time it learns that actually, this belongs to this other word or this other topic, so that’s something that is learned over time.

He confirms it isn’t a specific database they are using to determine synonyms.

It’s not that we have like a specific database where we say this is how many words we have and how we treat them.

Lastly, he says that there isn’t any kind of matching of these synonyms between languages, which makes a lot of sense.  Words have different meanings in different languages, and even different context and change the meaning of a word between various languages.

Between the languages where we see like someone is searching in one language and we think we should show them content from another language, we tend to not do that.  I think it might be tricky with places like Latin America where you have like maybe have Spanish but it’s not the same Spanish as you have in Spain.  And in those cases we will try to learn those as synonyms because we see they have their browser set to Spanish and they’re using them interchangeably, so probably we will learn that.

So if there is a new keyword being added to your topic area – such as a brand name or a term that is new but used to describe something already known, it seems Google will learn that over time automatically.  So you don’t need to wait for Google to force push any kind of database update for Google to recognize it, but Google will do that on its own over time, as the new synonym is searched for and appears on pages it crawls.

We finally have the first Google Quality Rater Guidelines update of 2022, and like usual, it is … END_OF_DOCUMENT_TOKEN_TO_BE_REPLACED