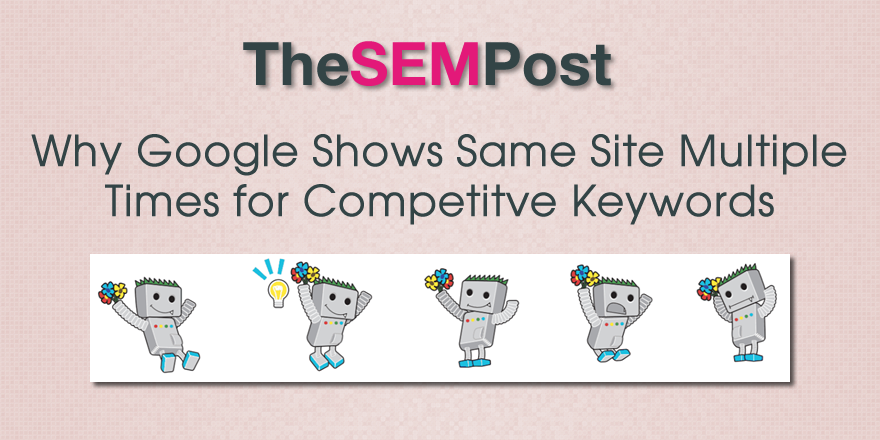 Sometimes when you do a Google search, you end up seeing the same site multiple times on the first page of the results, sometimes occupying the top 3 positions. Sometimes you see the same site many more times in the top 10, which is pretty common with some searches with Yelp results.

But is this considered a bug?  Or is it just a good search result?  John Mueller addressed this situation in the last Google Webmaster Office Hours.

In general, that is not necessarily a mistake.  We do sometimes show the same site multiple times in the same search results page.  That can be completely normal.

It’s something that depends quite a bit on the queries and the sites involved, but it’s not that we would look at that and say, “This is wrong, a site should only appear once in every search results page.”  It can definitely happen that we show one site multiple times.

So the fact Google is showing the same site multiple times within the same search results is simply the algorithm working as intended, and is not a sign of a bug.

It was then brought up about local results, where seeing multiple results from the same site is something that can be seen regularly for some local keywords.  But it definitely isn’t a local only issue, it happens for all types of queries.

Yeah, I don’t know where it would be more common.  It can happen in all kinds of places.  I have seen that for some very competitive terms, but also for a lot of weaker terms, where maybe they’re not in that much competition, but one site has a lot of content around this term.

Mueller then stressed again that this wouldn’t be seen as a bug, but searchers can always send feedback about the results.

So that is something, at least from my point of view, we wouldn’t see that as a bug.  If the search results are bad because of that, then I would still submit feedback.  But it’s not that I would say the number of times that a page is shown in search results is by itself a criteria that something is broken.

So if you have ever looked at the results for a query, competitive or not, and wondered why one site can dominate the search results, it mainly comes down to the most relevant pages, and if that means multiple pages from the same site satisfy that query, then Google will show them.

We finally have the first Google Quality Rater Guidelines update of 2022, and like usual, it is … END_OF_DOCUMENT_TOKEN_TO_BE_REPLACED