You are here: Home / Google / Why Spam in Google is a Bigger Problem in Some Languages 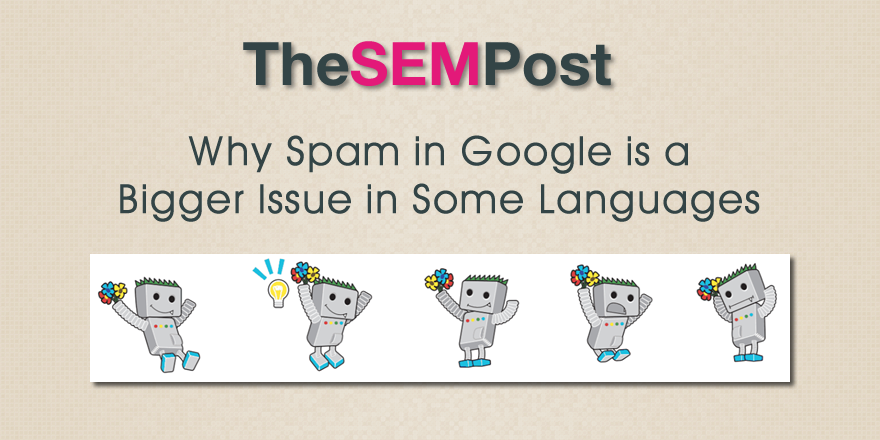 Over the years, there have been many comments that web spam is a bigger issues in some languages compared to others, and some old school tactics – such as buying links – still work in non-English search results.  Are there more spammers in non-English languages?  Is it a matter of lack of competition? Or do the algos not work as well in other languages?

During yesterday’s WebPromo.Expert Google Q&A, Andrey Lipattsev, Search Quality Senior Strategist at Google,was talking about why some countries see more spam, and it really is an issue of lack of competition.

In another of Eastern European, and not just Eastern European markets, I think it’s an issue for the majority of the BRIM countries, for the Arabic speaking world there just isn’t enough content as compared to the percentage of the population, of the internet population that those regions represent.

I don’t have up to date data, I know a couple of years ago we looked at Arabic for example, and that disparity was enormous.  If I’m not mistaken, the Arabic speaking population in the world is something like five or six percent, maybe more, correct me if I’m wrong.  But very definitely, the amount of Arabic content in our index is several orders below that.

So that means, we just don’t have enough Arabic content to give our users, even if we wanted to.  And in some areas, you can exploit that amazingly easily.  If you create a bit of content in Arabic, whatever it looks like, we’re going to go well we don’t have anything else, so we’ll serve this, and it ends up being horrible.

And people will say, you know, this works!  I keyword stuffed the hell out of this page, bought some links and there it is, number one!

There’s just nothing else to show, you know.  So yeah, you’re number one.  The moment someone actually goes out and creates high quality content that’s there for the long haul, you’ll be out, and that thing will be replaced.

One of the things we try to do in particular, and one of the reasons why I’m traveling there, is really work with those markets and provide the tools and the means to those webmasters and SEOs and marketing agencies, the tools, the guidelines, the best practices, here’s what you can do, here are the tools that Google gives, so on and so forth.

He also comments a bit on the algorithms impacting all languages, even if it seems that some languages are spammier than others.

The technology is used and the approach is used, they’ve moved on so much, as you guys know.  In some parts of the world, again, English speaking is a very broad, in Western English speaking has moved on so much, and we’ve adapted to them, and that opened up what you might call holes or exploits then for other types of content and other types of behaviors.

And we’ll patch them and we’ll flag them, it’s just obviously they’re a less of a priority, we want to keep pace with the new developments.

We have seen Google target spam in certain languages and countries over the years, especially by taking down notable link spam networks, such as ones in Poland and Germany, among others.

It is kind of surprising to hear someone from Search Quality at Google talk about the lack of available quality content in some languages. It makes spammers aware that there could be an easy route to ranking and revenue in these markets, making the problem of lack of quality content an even bigger problem with more spam being added now that spammers know there is that gap there.

That said, there could be SEOs who set out to create quality content sites in other languages now that they know the opportunity exists  too, and they can fill that noticeable gap in Google’s search index for some less popular languages, and bounce some of those low quality results lower in the search results.

But bottom line, some languages seem to have more spam not because spammers can outrank quality content easier, but rather there isn’t any quality content available to rank above the spammier results.

Google has released a new version of the Google quality rater guidelines, a year after the last … END_OF_DOCUMENT_TOKEN_TO_BE_REPLACED