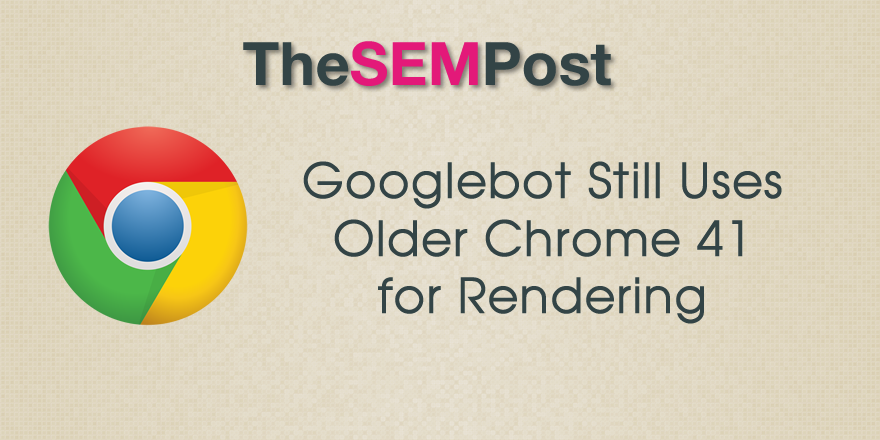 At yesterday’s Google I/O John Mueller revealed that Google is still using the older version of Chrome – Chrome 41 – for their official rendering by Googlebot.  This means that some newer coding features available in the newer versions of Chrome and other browsers won’t be rendered properly by Googlebot.

What’s not immediately clear from the user agents is that Googlebot is currently using a somewhat older browser to render pages.  It uses Chrome 41 which was released in 2015.

The most visible implication for developers is that newer JavaScript versions and coding conventions like arrow functions aren’t supported by Googlebot.  And with that, also any API that was added after Chrome 41 currently isn’t supported.

The biggest issue for this is that some newer Javascript and APIs do not work properly in older versions of Chrome, and Chrome 41 is from 2015.  So if newer features are used, the rendering for those newer features won’t render or will render incorrectly by Googlebot’s rendering of those pages.

If you would like to check if you are using something that cannot be run properly in that version of Chrome, Google also references this site which details what is supported in Chrome 41, and you can also use it to compare to the current version of Chrome, or any other browser, too.  You can also use Fetch and Render in Google Search Console as well or the mobile friendly test.

Mueller does not recommend downloading older versions of Chrome for security reasons.

Last August, Ilya Grigorik from Google said an update to the Chrome version was something the team was “Actively thinking about”, but 10 months later, it is still Chrome 41.

no official dates, but definitely something the team is actively thinking about.. 🙂 /cc @HenrikJoreteg

We finally have the first Google Quality Rater Guidelines update of 2022, and like usual, it is … END_OF_DOCUMENT_TOKEN_TO_BE_REPLACED