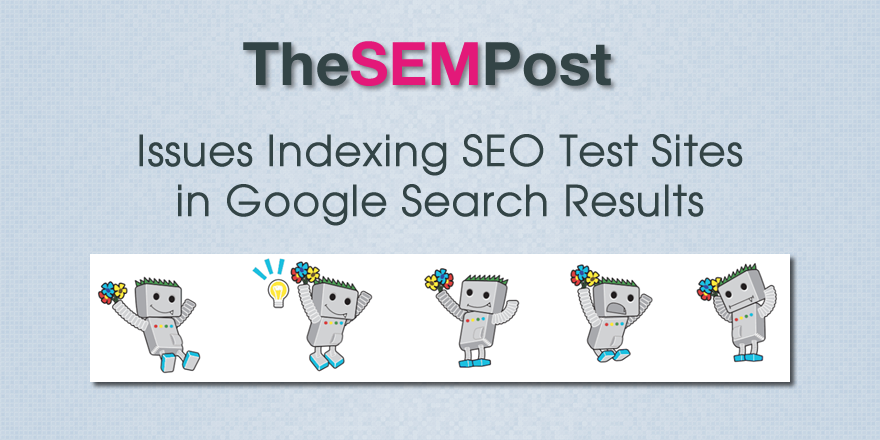 Many SEOs do a great deal of testing when it comes to indexing and ranking in the Google search results.  It can be a quick way to see how Google handles some situations, especially when it could influence ranking factors.

The question came up in the Reddit AMA with John Mueller about why Google isn’t indexing content from test sites after using Fetch and Render, something a couple other SEOs noticed as well.

Testing is something that is also debated in the SEO community about whether things can be tested just on a test site created solely for the test versus testing on a site that is already ranking and performing well in Google.  Many of the signals Google uses for ranking won’t be present in a test site, especially a brand new one.  And many SEOs might put the technical work into a test site, but a lot of other things that are present on a regular site but not a test site, such as significantly more content, About Us pages, links to social media accounts for the site, etc, do not usually get added by SEOs to a test site.

However, many SEOs don’t necessarily want to make changes to a money site, especially if it is something pushing the envelope on blackhat versus whitehat SEO techniques.  They prefer to keep their main sites as they are, until they have confirmed that these tests will actually work.

There definitely are some things that can be tested on a test site, especially when it has to do with more technical things that can be checked via Fetch and Render, or testing markup with the Google’s testing tool.  But seeing results in the search results, especially where ranking is concerned, is much harder for a test site, unless you are also building links and doing full SEO on it as well.

John Mueller commented about the situation with test sites not indexing very well, and it comes down to the fact that test sites often appear artificial, while Google’s algo “works best on normal websites.”

Test websites are … kinda artificial, right? Our algorithms work best on normal websites :-). If you see an effect with a test site, I wouldn’t assume that it’s always transferable to a normal website. That makes it harder to test things (since you can’t really control all variables on a normal site), but IMO tuning our algorithms to work well for test sites doesn’t make much sense.

FWIW I have the same problems with my test sites when I try things out, you’re not alone! :-))

Unfortunately, this also means that there is a high chance that some things that SEOs have “proven” with a test site might not actually be that accurate, and testing with a site already indexed and ranking is probably needed.

So if you are having issues with test sites, it could simply be because they are test sites instead of “real ones” with Google’s algos somehow being able to identify these test sites as just that, test sites, and not indexing them as they would non-test sites.

We finally have the first Google Quality Rater Guidelines update of 2022, and like usual, it is … END_OF_DOCUMENT_TOKEN_TO_BE_REPLACED