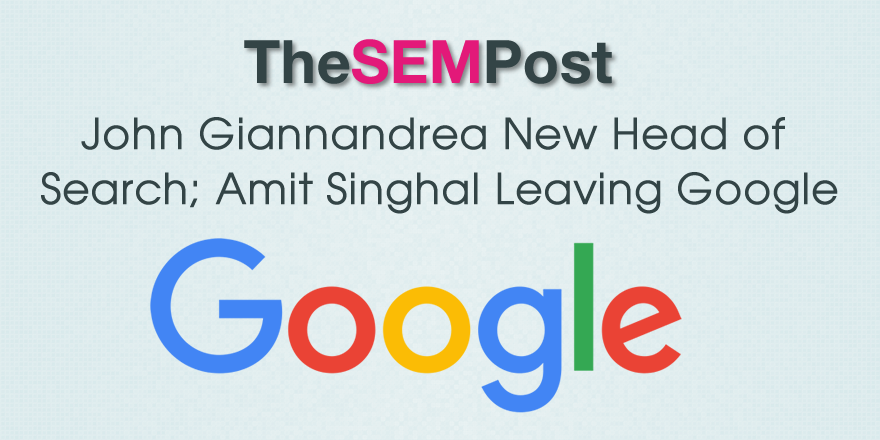 Google has a brand new head of search.  Many were surprised to see that Amit Singhal, the head of Google Search, is leaving Google on February 26th.  Singhal has been a familiar figure for those who follow Google Search.

His replacement has already been announced as John Giannandrea, who was the Google executive behind their recent forays into machine learning in search, including RankBrain.  He has been with Google since 2010.  His new official title will be Vice President of Engineering.

It also shows the importance Google is placing on artificial intelligence and machine learning in their search algorithm, something search marketers have been watching closely in recent years, particularly with the release of RankBrain into the Google search algo last year.

Giannandrea was the head of Machine Learning when Fortune Magazine profiled him several months ago about Googe’s machine learning initiatives.  He joined Google when the company aquisitioned Metaweb, the company he founded in 2005.

Giannandrea, 50, was born in Bridge of Allan, Scotland. His first attempt at humanizing machines was an early personal assistant at an Apple spin-off called General Magic in the ’90s. Its product looked like a smartphone primogenitor, but it fizzled in the pre-Internet era. Giannandrea went on to become the CTO at then Internet juggernaut Netscape. He later co-founded voice-recognition startup TellMe, which let users call a number for sports scores or even for a conversation with Santa Claus.

But word recognition, he realized, was just a small piece of the puzzle of computer-human interaction. In 2005*, Giannandrea founded Metaweb, which catalogued connections between not just words but objects. Google bought it in 2010.

Amit Singhal shared a lengthy post on Google+ about why he was leaving, where he details he wants to give back to others when he asked himself what he wants to do for the next fifteen years.  He also talks about his years at Google and how Search has been so important.

Now is a good time to make this important life change. Things are in amazing shape. Search is stronger than ever, and will only get better in the hands of an outstanding set of senior leaders who are already running the show day-to-day.

It fills me with pride to see what we have built in the last fifteen years. Search has transformed people’s lives; over a billion people rely on us. Our mission of empowering people with information and the impact it has had on this world cannot be overstated. When I started, who would have imagined that in a short period of fifteen years, we would tap a button, ask Google anything and get the answer. Today, it has become second nature to us. My dream Star Trek computer is becoming a reality, and it is far better than what I ever imagined.

Singhal’s last day with Google is on February 26th.

We finally have the first Google Quality Rater Guidelines update of 2022, and like usual, it is … END_OF_DOCUMENT_TOKEN_TO_BE_REPLACED