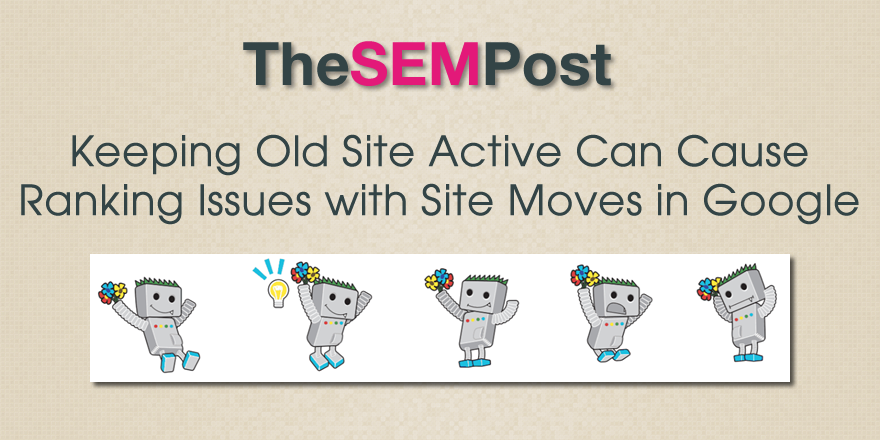 Normally when one does a site move – whether for https or moving to an entirely new domain, one of the steps to to redirect all the old site pages to the new ones.  This helps Google match up the old pages to the new ones, as well as transfer all the ranking signals, including links.  But what if you move a site and keep the old site still active?

A discussion about a site’s SEO problems came up in the last Google Webmaster Office Hours, and one of the reasons the site move wasn’t working as intended when it came to Google rankings was due to the fact the site kept the old version of the site active.  When there were two versions of the site, Google won’t always know which of the two versions to rank – and as is often the case, it can be very likely that the one the site owner would like to rank isn’t the one that actually is.

In general what I noticed with your site [..] is that you changed domain names at some point and some of the content is still live on the old domain so what essentially happened there is our algorithms kind of noticed that partof this domain moved over but we couldn’t move the whole site over because there was still content that’s live on the other site.

He also suggests the solution to remedy the fix when a site has been split across two domains, which is really about cleaning up a messy migration.

So that’s one thing I try to figure out where the content isn’t redirecting and either 404 that or just 301 that as well so that we can really forward all of the signals for the old domain and forward them for the new domain.

I believe if you search for the old domain name we do show your new domain as well probably on top as far as I remember.  But this is one of those things where if you do a migration and you don’t do a clean migration then sometimes you see these kind of aftereffects where it’s a bit tricky.

Normally when a site is migrated, there will be temporary fluctuations in the rankings that tend to settle down after a few weeks. After all, Google is having to index what is a new site, then transfer the ranking signals via 301 redirects which requires crawling the old URLs.  So when those old URLs are still active and not redirected, it does make it confusing because ranking signals then get split between two sites, often resulting in loss of rankings in Google.

This kind of situation reiterates how important doing clean migrations is when changing one a site from one domain to another, especially when the site wants to retain their rankings in the Google search results.

Google has released a new version of the Google quality rater guidelines, a year after the last … END_OF_DOCUMENT_TOKEN_TO_BE_REPLACED