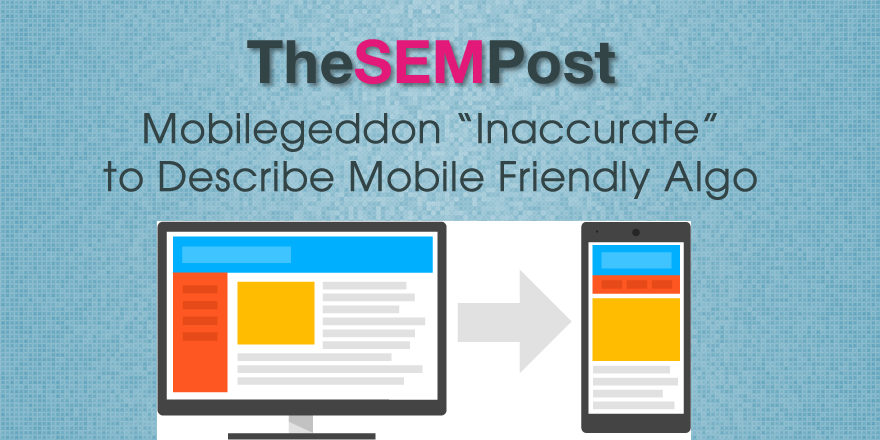 At SMX Sydney, Gary Illyes addressed the topic of the mobile friendly algo, and more specifically, the term “Mobilegeddon” that has been commonly used as its unofficial name, and said,”The term mobilegeddon is inaccurate”.

And we shall call it…

We all know SEOs love a sexy name to go along with their algo updates and in recent years Search Engine Land has been the one that coins them, such as Farmer Update (before it became publicly known by Google’s internal name Panda, and everyone switched), Pirate update, Pigeon update… so it wasn’t surprising that Search Engine Land coined the mobile update something, and they chose… “Mobilegeddon.”

Now, the term Mobilegeddon is definitely a name that strikes fear into many SEOs – and in many others, as it was picked up by mainstream media.  Describe anything as a something-geddon or something-pocalypse, and it implies that whatever is hitting will be massive and with a huge impact.  And media loves to go for the click bait aspect of anything they can call a -geddon or -pocalypse… how many snow-pocalypses and snow-mageddons have we heard about over the past couple of years?

And it wasn’t a surprise how important mobile is to Google.  Matt Cutts mentioned it countless times at various conferences before he went on leave, and stressed the importance of having a site that works on a mobile device.

Will it become a -geddon?

Both Gary Illyes and John Mueller have been pretty open about exactly where the mobile friendly algo is likely headed next… targeting both page speed and sites that utilize app interstitials.  So even in that regard, those signals thrown into the mix aren’t really on a -geddon scale either.

Site owners who were concerned about the impact a non-mobile-friendly design could have on their visitors could easily check their Google Analytics, or whichever traffic software they used – and could easily see how the percentage of mobile traffic for most sites was growing exponentially.

When Google decided to give the boost, they also gave webmasters time to get ready for the boost going live, it wasn’t like most of their algos where we learn about it after the fact.  If Google really wanted to go for the -geddon affect, they would have unleashed it on unsuspecting webmasters without any notice at all.

When it went live, most webmasters barely saw much of a boost or decline, far from a -geddon.  Many webmasters did ensure their sites were mobile friendly or made the changes needed so they could get their “mobile-friendly” tags for their web pages.  So while the impact was greater than Panda or Penguin in terms of the number of sites impacted, the overall affect in rankings was significantly smaller because many sites became mobile friendly.

So yes, Gary Illyes is bang on when he said the term mobilegeddon to describe the mobile friendly algo is inaccurate.  The name -geddon should be used on something -geddon-worthy.  But here’s hoping we don’t have to find out about an upcoming Google algo at some point that is truly on a -geddon scale 🙂  I think most SEOs prefer an algo that gives a warning shot before the impact is really ramped up.