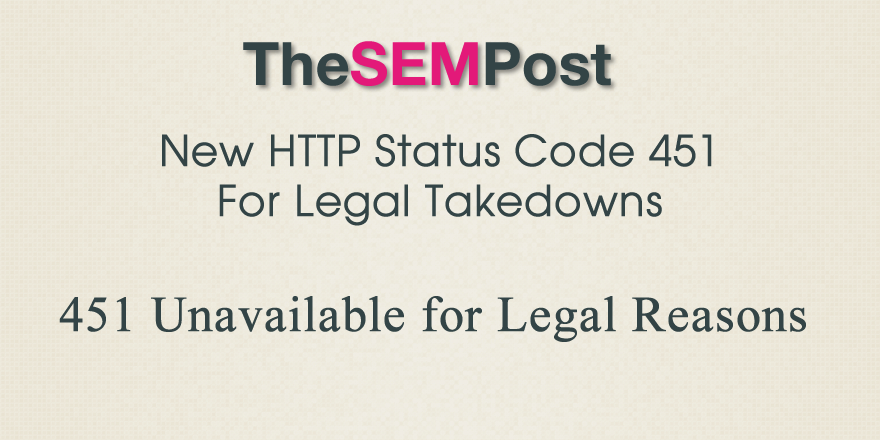 The new status code is 451 with the description set as “Unavailable for Legal Reasons” on the page.

They do request that ISPs who are using this status code also include details about why it has been removed, although I can see it being used often without the explanation.

Responses using this status code SHOULD include an explanation, in the response body, of the details of the legal demand: the party making it, the applicable legislation or regulation, and what classes of person and resource it applies to. For example:

In a blog post by Mark Nottingham he says that it became apparent that there would be benefits from adding a new status code, even with the concern that they are limited to the 400-499 range, and once they are gone, they have no more in the 4xx range.  But he felt it was more important as censorship issues become more prevalent as well as sites wanting the ability to crawl and discover pages that have been removed via legal takedowns and displaying a specific status code that represents that.

More importantly, we started to hear from members of the community that they wanted to be able to discover instances of censorship in an automated fashion. For example, Lumen (previously, Chilling Effects) and Article19 expressed interest in being able to spider the Web to look for the 451 status code, so they could catalogue censorship.

He also mentions that some sites have begun to adopt the 451 status code experimentally.

They interestingly make a case where a party might not want a case of a page being taken offline as a result of legal action.

Clients cannot rely upon the use of the 451 status code. It is
possible that certain legal authorities might wish to avoid
transparency, and not only demand the restriction of access to
certain resources, but also avoid disclosing that the demand was
made.

So it is possible if the use of 451 becomes standard, that some legal takedowns might request that a 451 status code not be used, specifically because some might deem it too transparent.

Previously, companies were usually using the 403 Forbidden status code, although it didn’t exactly fit a scenario where a site or page was removed for legal reasons.

Google has released a new version of the Google quality rater guidelines, a year after the last … END_OF_DOCUMENT_TOKEN_TO_BE_REPLACED