You are here: Home / Google / New Panda Refresh Timeline: Expect in Next Couple of Weeks 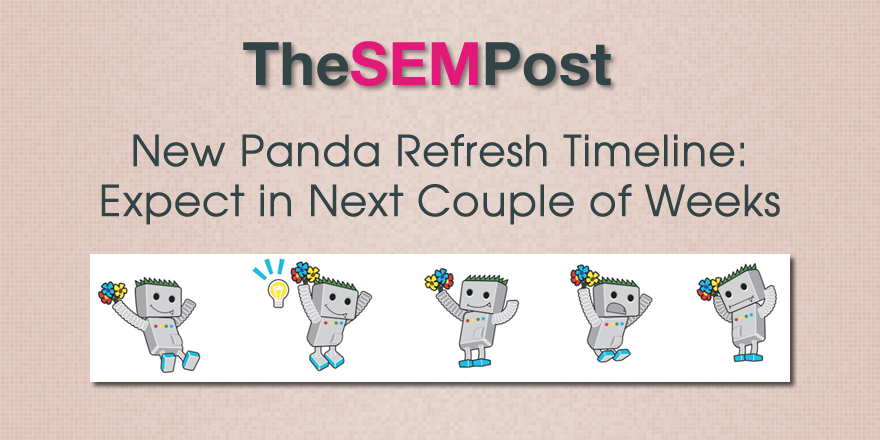 We have all been anxiously awaiting the next Google Panda update ever since Gary Illyes from Google officially announced the upcoming refresh a month ago.  And it looks like we will be waiting a little bit longer.

In today’s Google webmaster hangout, John Mueller once again addressed when we might see the Panda refresh, and it is now looking as though it will be sometime in the next couple of weeks – so a bit longer than the 3-4 weeks Gary Illyes initially said when he announced it at SMX at the beginning of June.

A few weeks ago we said that this refresh would be happening in a few weeks, so it is kind of coming up.  I doubt its going to happen this week because it’s a holiday and it’s Friday and people are busy doing other things, but I imagine in the next couple of weeks this is something that it might be happening.

So that kind of sets expectations, we try not to provide an exact date for when these things roll out because things can always change in the meantime but I expect this to happen fairly soon.

Mueller also provided confirmation a week ago that it was still coming, although he didn’t reference a timeline then.  However, Gary Illyes did make a joke about why he should stop giving time frames on Google updates.

Webmasters probably shouldn’t be surprised it is taking slightly longer than anticipated, as updates and refreshes are often delayed from when they are first hinted at as upcoming.  And it should give webmasters who were frantically trying to finish Panda-related fixes after the announcement at the start of June a bit more reassurance that their fixes might make it in before the official cutoff.

Of course, there still is that “might” in there, so there is the possibility it could still be longer than a couple of weeks.

So bottom line, we very, very likely will not see anything this week or weekend (although Google has been known for pushing things out on Friday afternoons) but sometime within the next couple of weeks we will finally see the Panda refresh roll out.

Google has released a new version of the Google quality rater guidelines, a year after the last … END_OF_DOCUMENT_TOKEN_TO_BE_REPLACED